Alstom is convinced that decarbonising mobility is an essential part of fighting global climate change and that hydrogen trains are a key technology to enable zero emission mobility.

Alstom is the world’s largest international rail technology player, we have made furthering the development of smart, green technologies like green traction a key focus of our 2025 strategy. The aim is to provide zero-emission alternatives on non-electrified rail tracks. The potential is substantial: in Europe as the world’s largest rail region, almost half of all tracks are not electrified and currently rely on diesel-powered trains.

Transportation accounts for around a quarter of global CO2 emissions. Unlike other sectors, these emissions have continued to grow, even as efforts to fight climate change have increased. Rail is already by far the greenest way to provide mobility for people and freight on land. Bringing hydrogen and battery as viable alternatives to using diesel power on non-electrified lines will unlock further reductions in the environmental impact of rail transport. On longer routes, hydrogen is the technology of choice, while non-electrified short distance rail routes are best served by battery trains.

Our Coradia iLint train, the world’s first hydrogen passenger train, has proven the viability of hydrogen rail. The train provides a whisper-smooth ride with the only emissions being water vapour. Its reliability, economics, and range of up to 1,000 kilometres make it a true alternative to diesel for regional non-electrified lines, and has led to orders in multiple countries as customers, the public and policy-makers realize the massive potential of the technology.

We are convinced that hydrogen and batteries will bring about change in rail transport – towards a cleaner and ultimately emission-free energy system. For hydrogen rail, a key driver is the rapid development of a hydrogen economy in transport supported by a strong public and private alliance. Hydrogen also has an important role to play in decarbonising other industries beyond transport, that’s why Alstom is a member of Hydrogen Europe and the Hydrogen Council.

The fuel cell is the core of a hydrogen train: it is where hydrogen is combined with oxygen from the atmosphere to generate electricity, with the only exhaust being steam and water. The electricity produced is used to directly power the train or stored in a high-performance battery. This battery is also used to capture energy when the train is braking, increasing its fuel efficiency. By acquiring Helion Hydrogen Power, Alstom now has access to in-house fuel cell competence, providing us with the unique ability to develop and integrate the entire on-board hydrogen technology for trains. 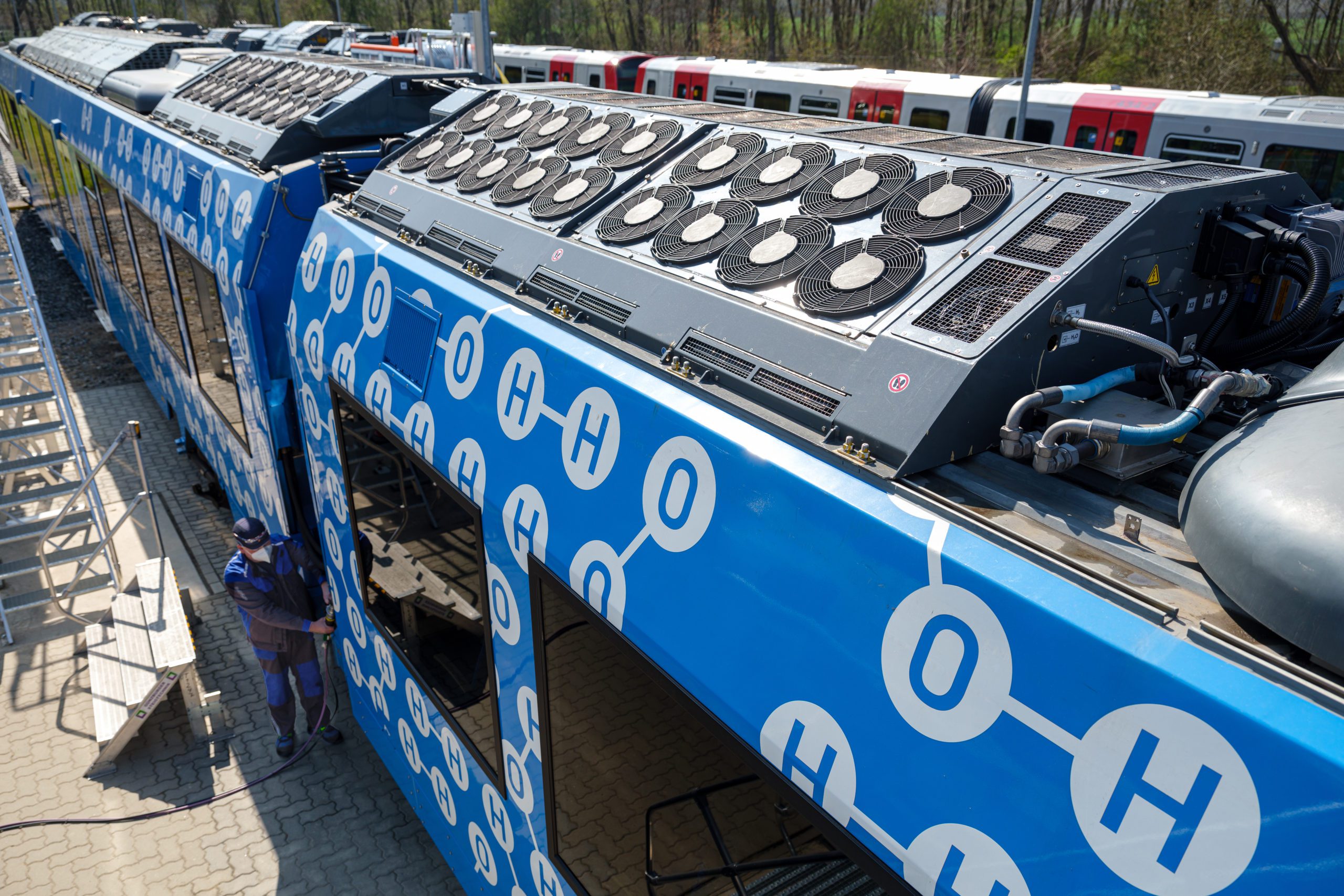 A hydrogen powered train takes about the same amount of time to refuel as a diesel one. The train will then run up to 1,000 kilometers after one filling Source: Alstom / Christoph Busse

With a little less than half of Germany’s rail network not electrified, the country’s operators need to rely on a large fleet of diesel passenger trains for rail transport. In 2014, Alstom started work on developing cleaner alternatives to these trains with the strong support of the German and regional governments. There was a substantiated political commitment to finding sustainable alternatives for passenger transport, and to contribute to developing long-term green mobility solutions. Alstom’s clear vision and technical know-how created the necessary test bed, and four years later, the world’s first pre-serial hydrogen regional train was ready for passenger service.

The Coradia iLint has been certified for regular use in Germany and Austria. This followed extensive testing carried out in Lower Saxony, Germany

where starting in September 2018, two pre-serial trains operated in regular commercial service for 18 months, travelling over 200,000 kilometres. Passenger feedback was very positive, with many comments on the smooth ride and lack of vibration compared to regular diesel trains.

The Coradia iLint proved that hydrogen trains are more reliable and require less maintenance than diesel trains, lowering service costs for train operators, which offsets the higher initial purchase cost of the train versus a diesel train. Hydrogen has the benefit of offering a similar range to diesel while providing the same operational conditions for availability and re-fuelling. Another important decarbonizing technology is that diesel train platforms can be retrofitted for hydrogen power. Alstom is convinced that with the total costs of ownership in mind, hydrogen trains are not only greener, but are also already an economically viable alternative to diesel trains.

Coradia iLint will run up to 1,000 km with one filling
Coradia iLint has run over 200,000 km in passenger service
The Coradia iLint first entered commercial service in 2018
Alstom hydrogen traction solutions have been sold in 3 European countries

First fleet of hydrogen trains to enter service in 2022

After successfully completing trials, 14 Coradia iLint trains will become the world’s first fleet of hydrogen trains to enter service when they begin operating on Germany’s Lower Saxony network in the summer of 2022. When fueled with zero-emission green hydrogen, each of these trains will ultimately reduce yearly CO2 emissions by 700 tonnes. They will be refueled from one of the world’s largest hydrogen refueling stations for passenger trains, located in Bremervoerde with the station being constructed with an eye on the future on-site production of hydrogen through electrolysis.

The first passenger operations with two pre-serial Coradia iLint trains were carried out in Lower Saxony very successfully and the hydrogen train has since operated in passenger service in Austria, been tested in the Netherlands, as well as demonstrated in Poland, France and Sweden. Alstom has also sold other hydrogen technology solutions to Italy and France.

The successful hydrogen technology developed in the Coradia iLint has led to further orders and an extension to a broader range of hydrogen trains. Alstom has taken orders for a total of 59 hydrogen trains and now offers the technology for its Coradia Stream trains in Italy, and the Coradia Polyvalent trains for France. The Polyvalent trains will be dual mode electric and hydrogen, enabling them to efficiently operate on the electric network, and on non-electrified track, powered by hydrogen. These orders are important first steps towards decarbonizing rail transport by bringing hydrogen-powered trains to multiple European countries.

Rail transportation is already the most energy-efficient transport mode and will only improve as hydrogen trains come into regular service. Alstom is proud to pioneer the trains that hold the promise to become the backbone of mobility in a sustainable world.