Snapshots into the lives of people and projects implementing the energy transition and the integration of hydrogen in the Netherlands. 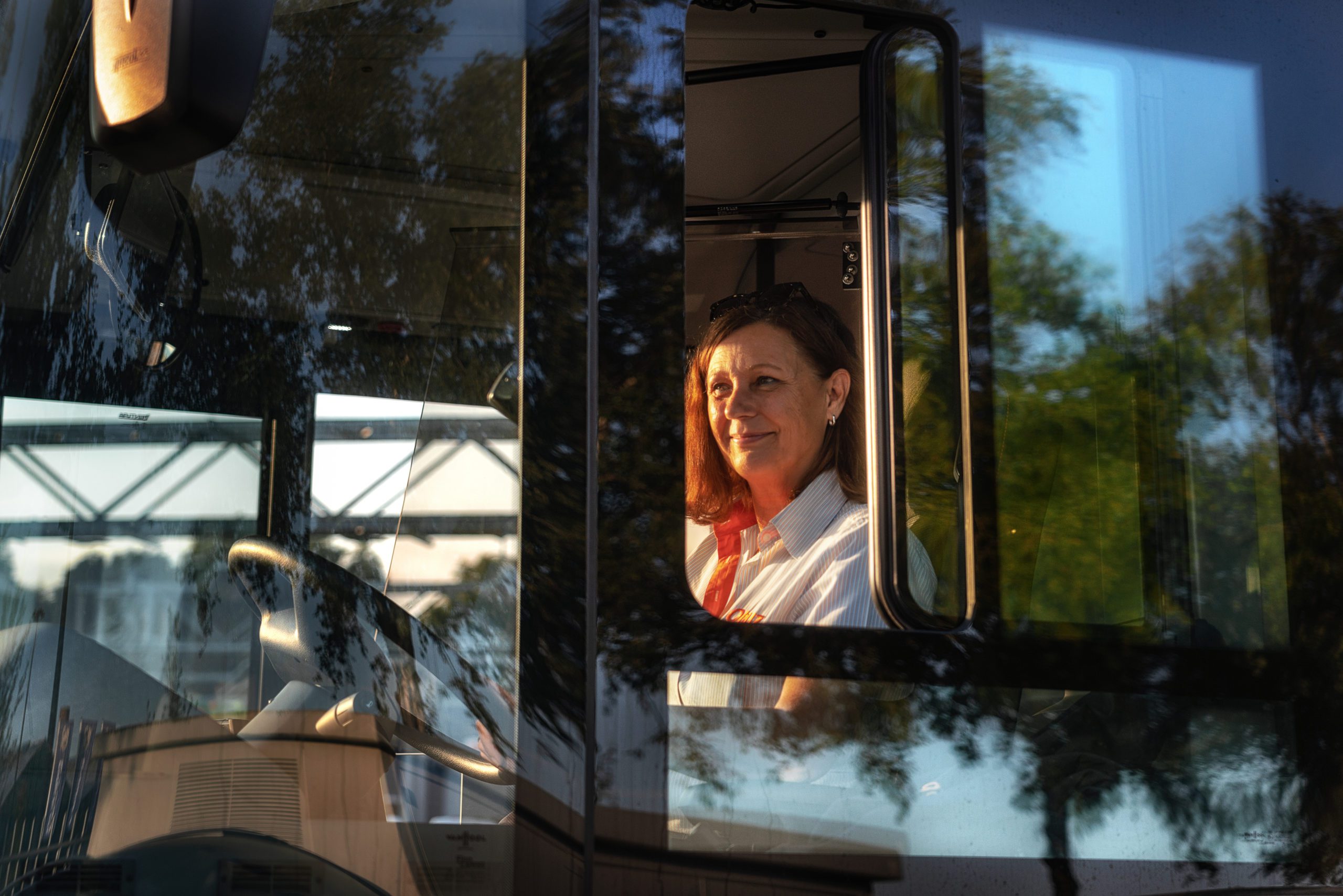 In the north of the Netherlands, Eemshaven is strategically located for the construction and maintenance of offshore wind farms. The Buss terminal at Eemshaven leads to a great deal of chain employment and to the growth of hydrogen. 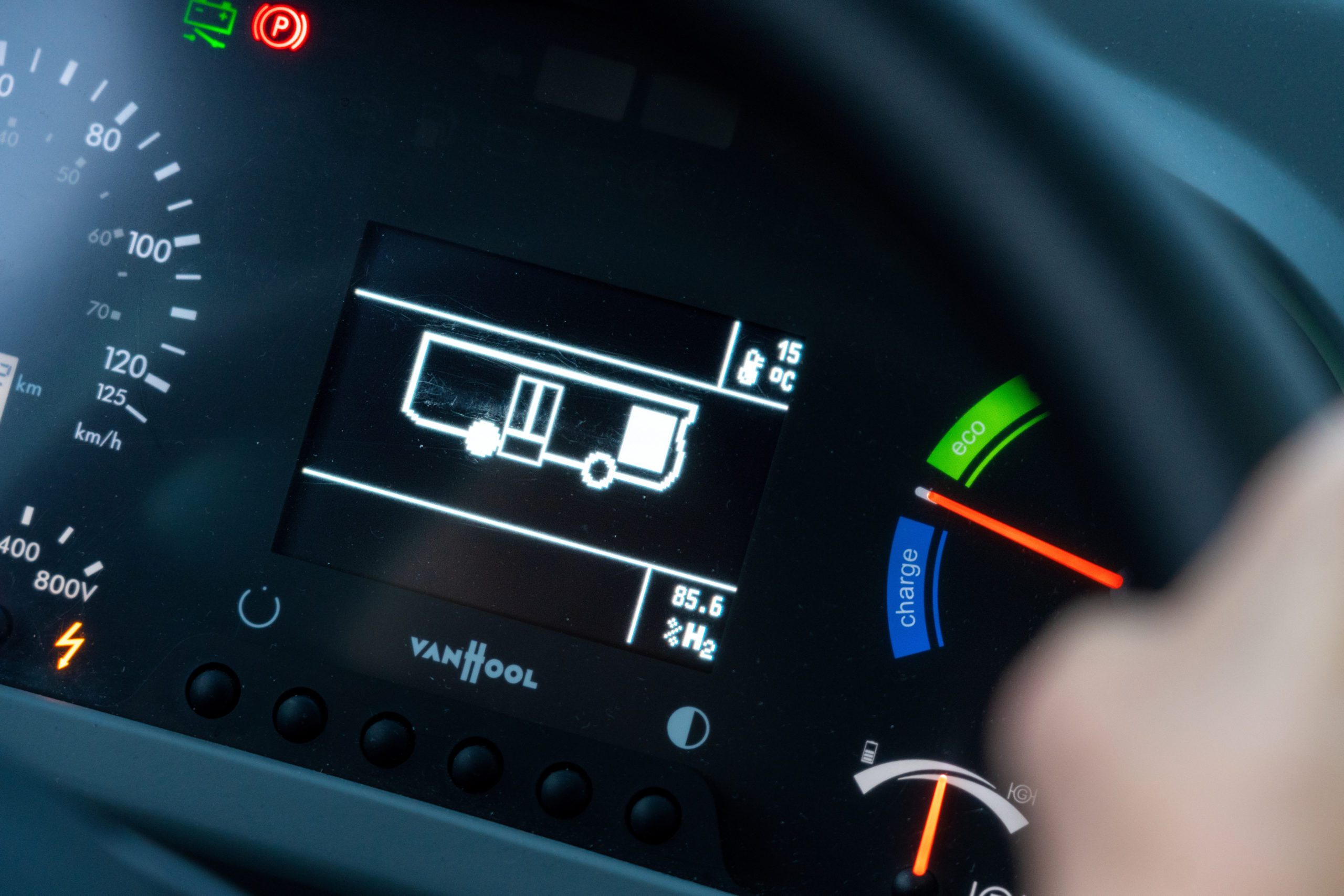 Employed by Qbuzz (a Dutch bus company owned by an Italian conglomerate), Gea Bakker, 60, starts up a hydrogen bus at the depot in Groningen. Bakker says she gets a lot of interest from young people wanting to know how a hydrogen bus works. 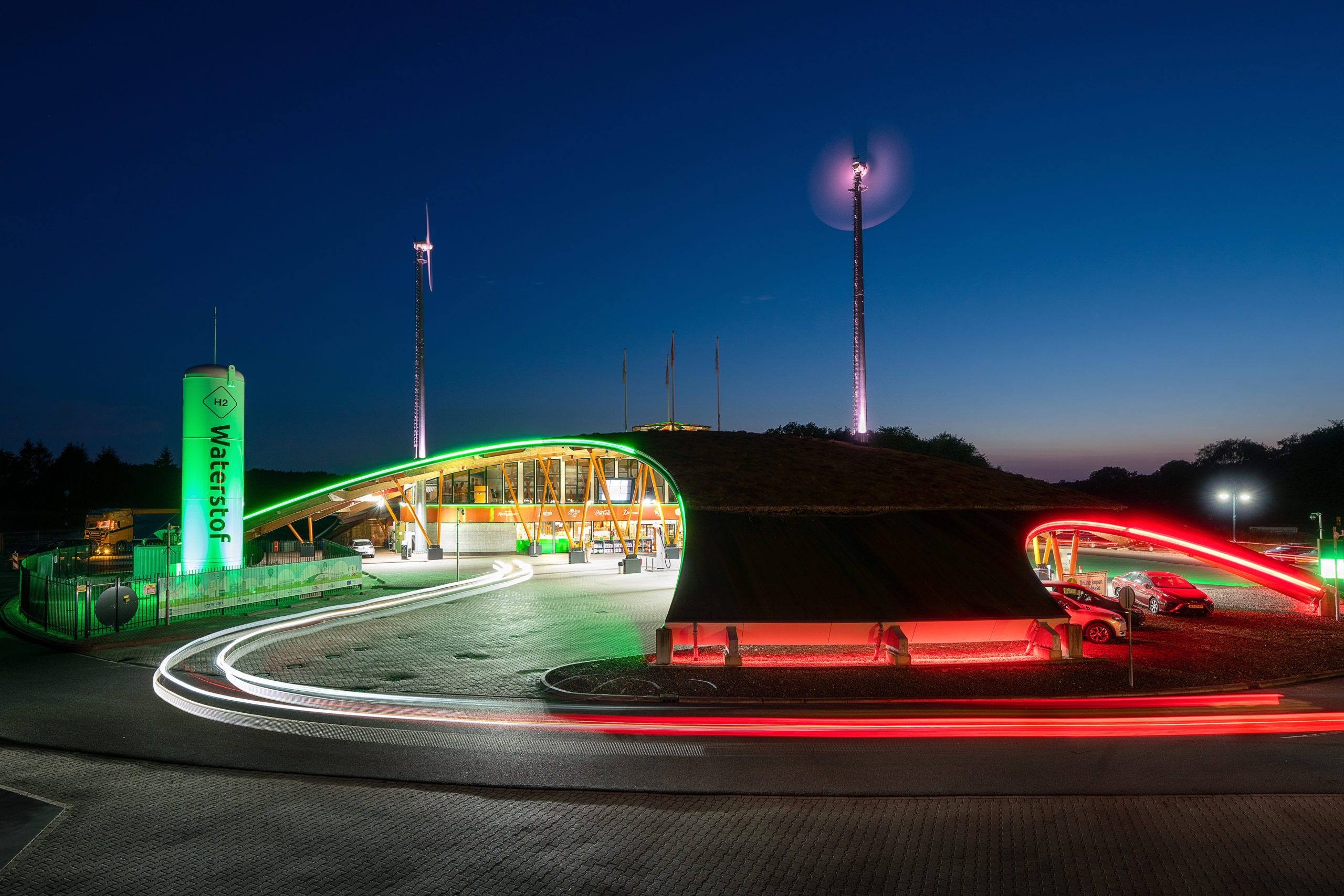 Green Planet in northern Netherlands is a multi-fuel station where fuels for all passenger and cargo transportation are available. It is one of the largest hydrogen filling stations in Europe, supported by regional, national and European funds. 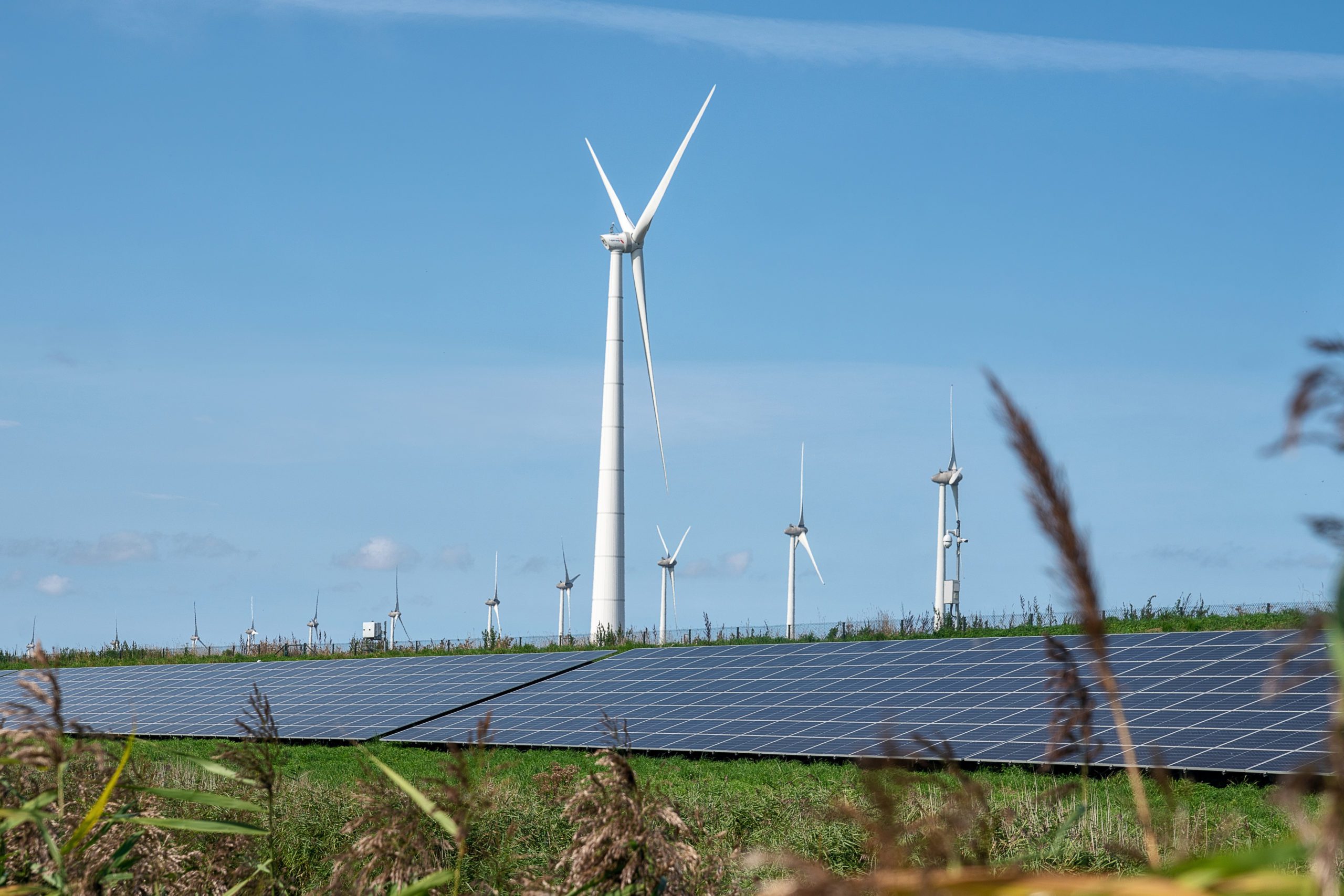 Wind turbines stand behind solar panels in Eemshaven in the Groningen Seaport. 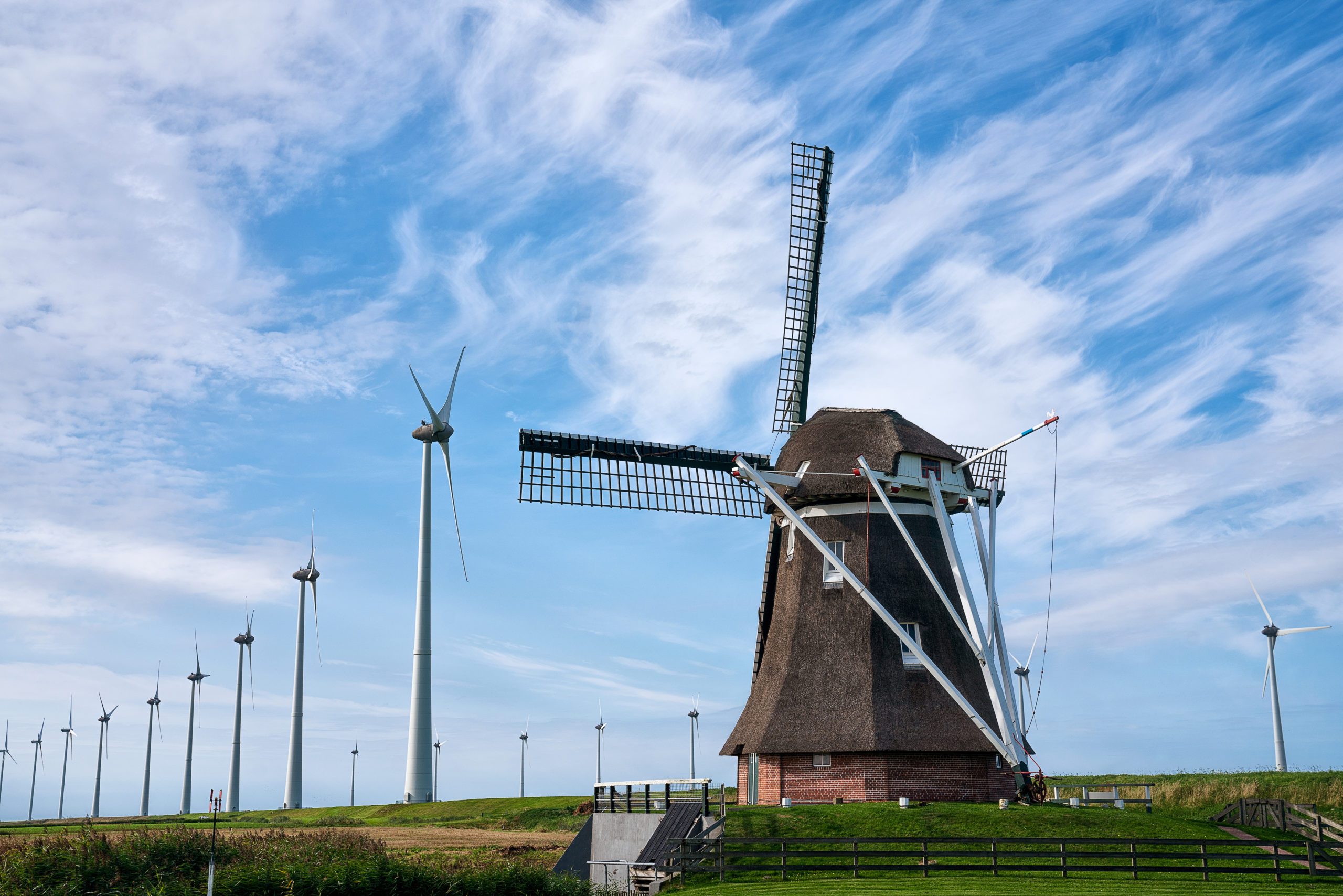 Wind turbine being built in the Netherlands

Continuum of past and present: The 1897 “Goliath” windmill (right) stands amongst the larger wind farm in Eemshaven in the province of Groningen. 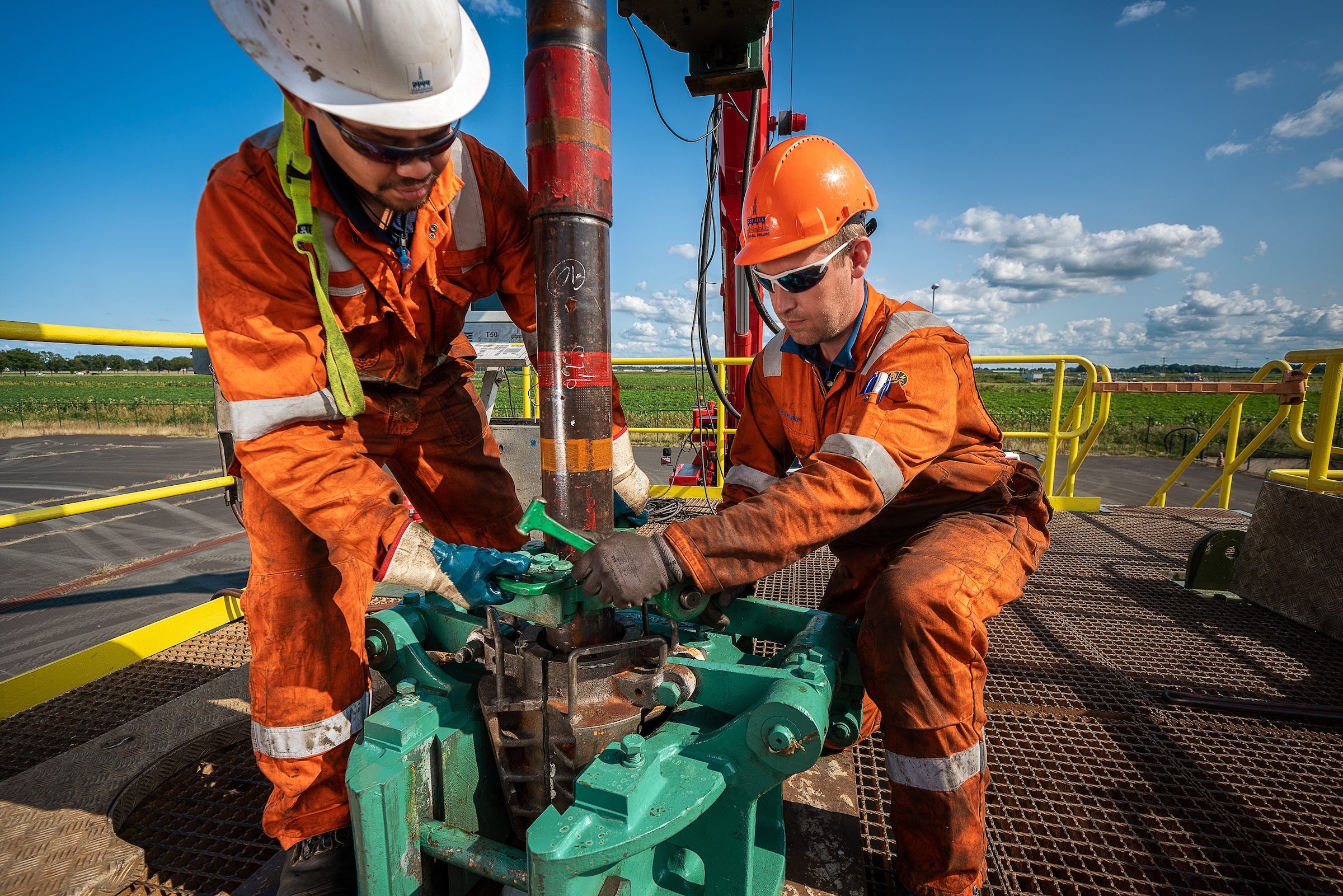 Technicians prepare a gas-sealing test above an underground cavern at a hydrogen energy project inside Gasunie’s HyStock site in Veendam. The underground cavern, formerly used to store natural gas, will now be used to house hydrogen. Each cavern is around 300-400 metres high and 50-80 metres wide: big enough to contain the Eiffel Tower. 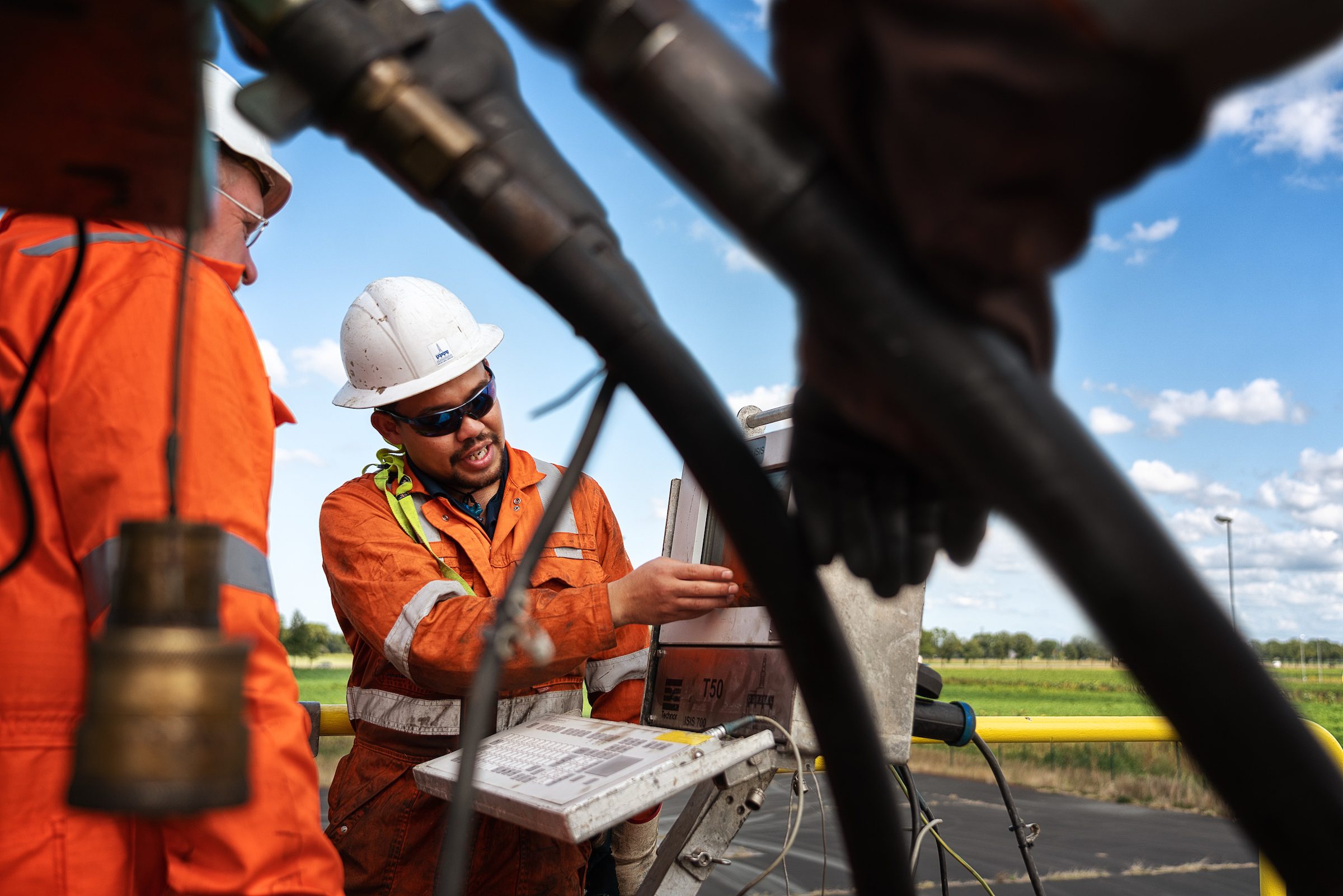 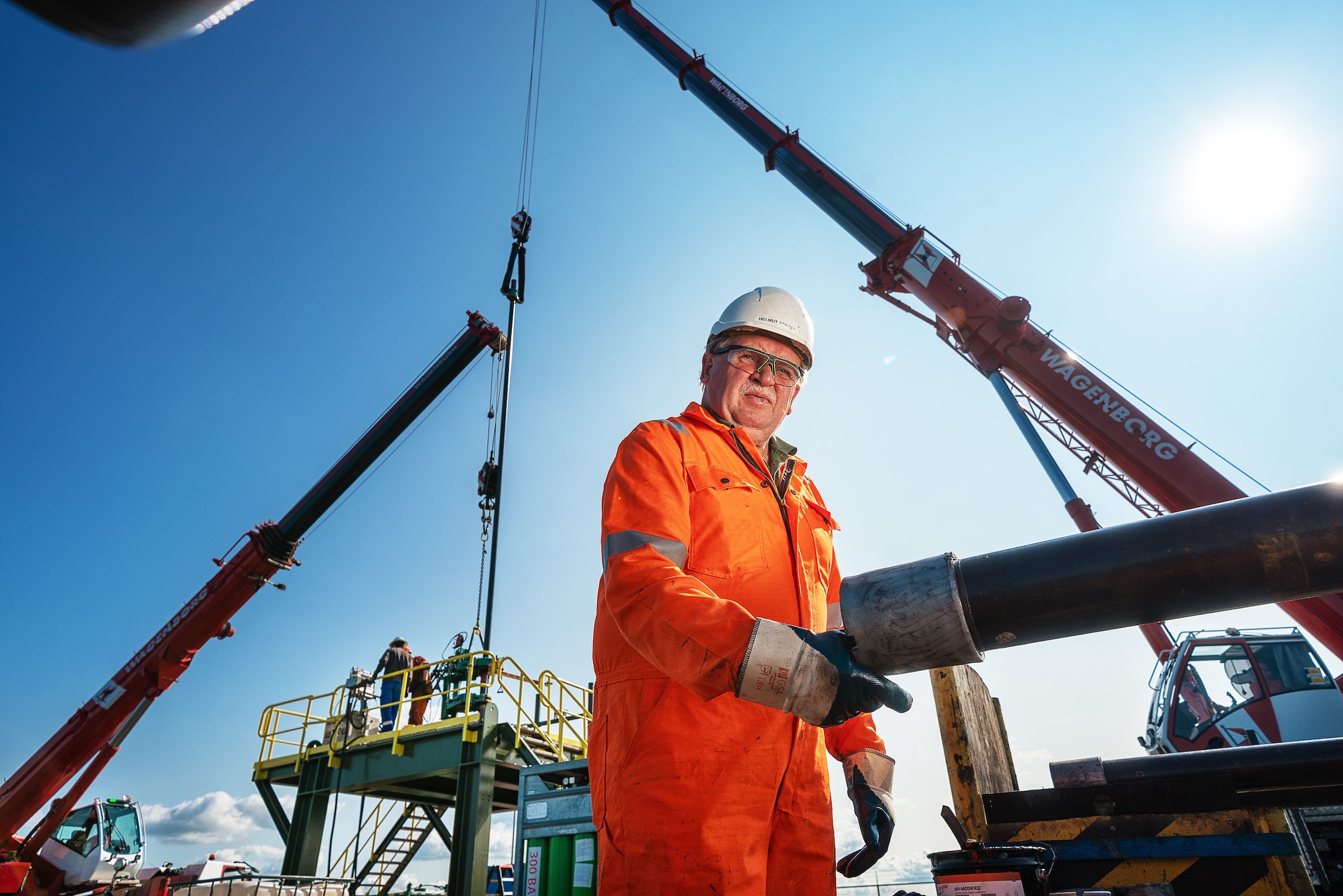 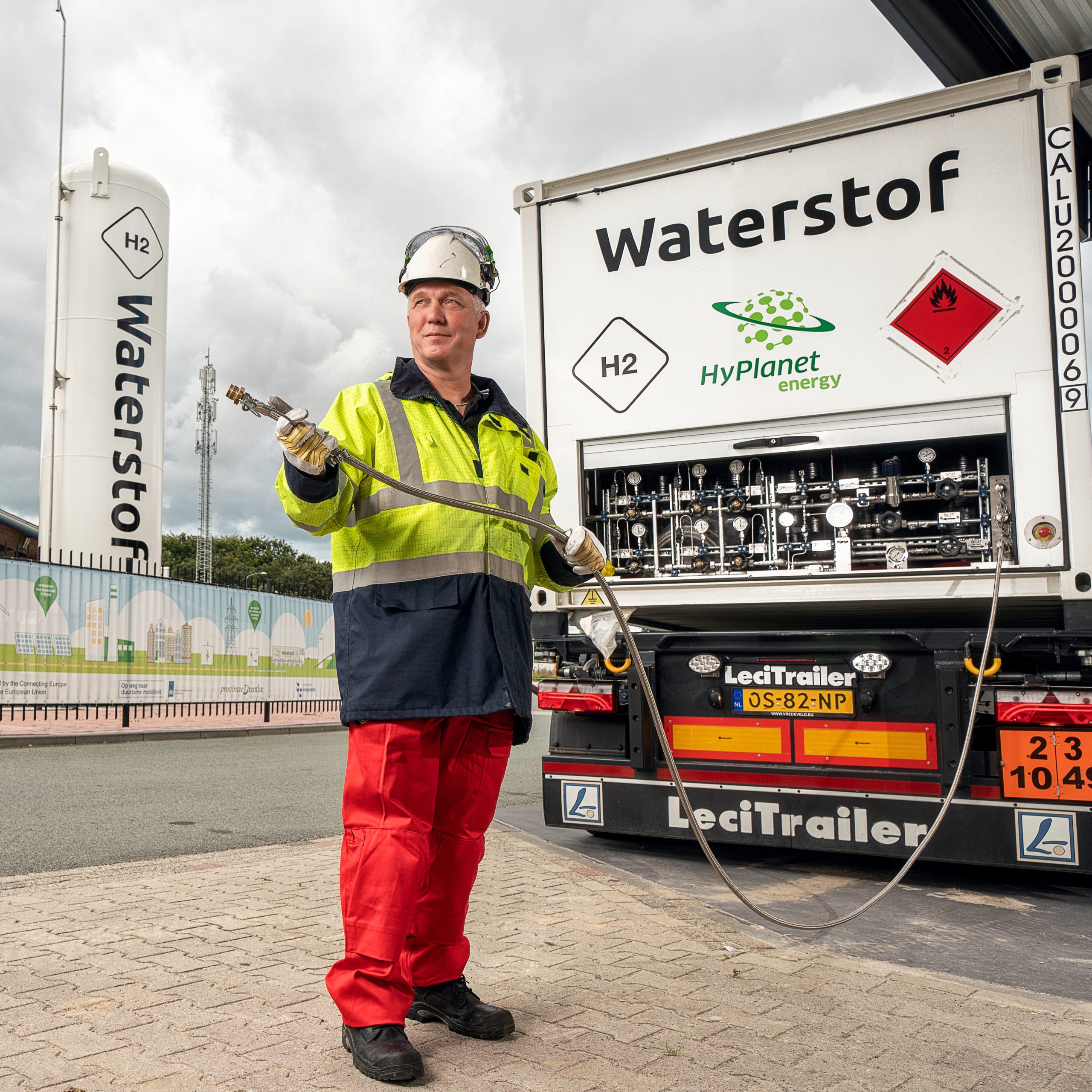 Workers prepare to refill the Green Planet fuelling station with hydrogen. Green Planet is a state-of-the-art multi-fuel station where fuels for all passenger and cargo transportation are available. 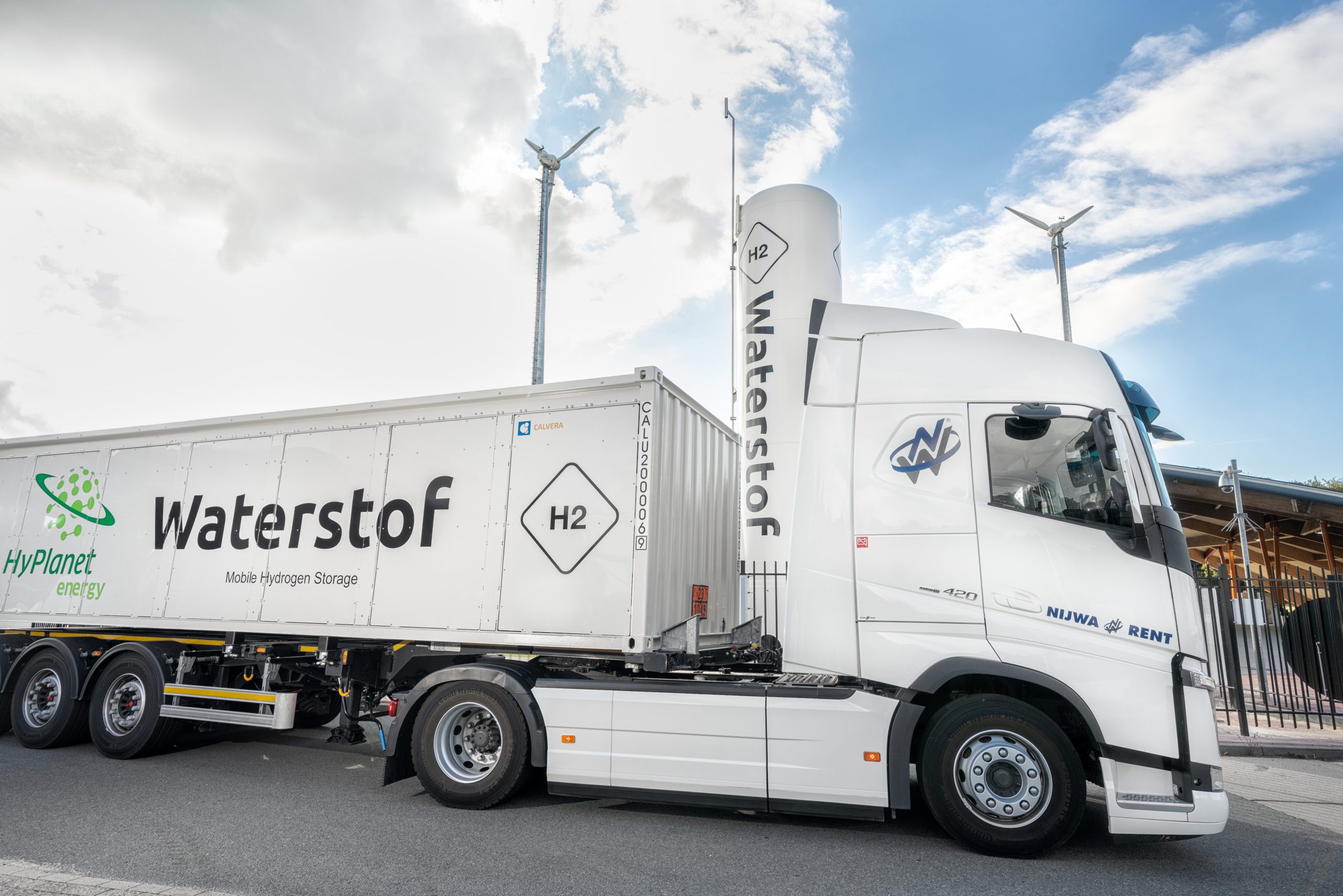 A trailer carrying hydrogen arrives at the Green Planet fueling station in northern Netherlands to refuel the station. The green hydrogen that is tanked here comes from electrolyzers. 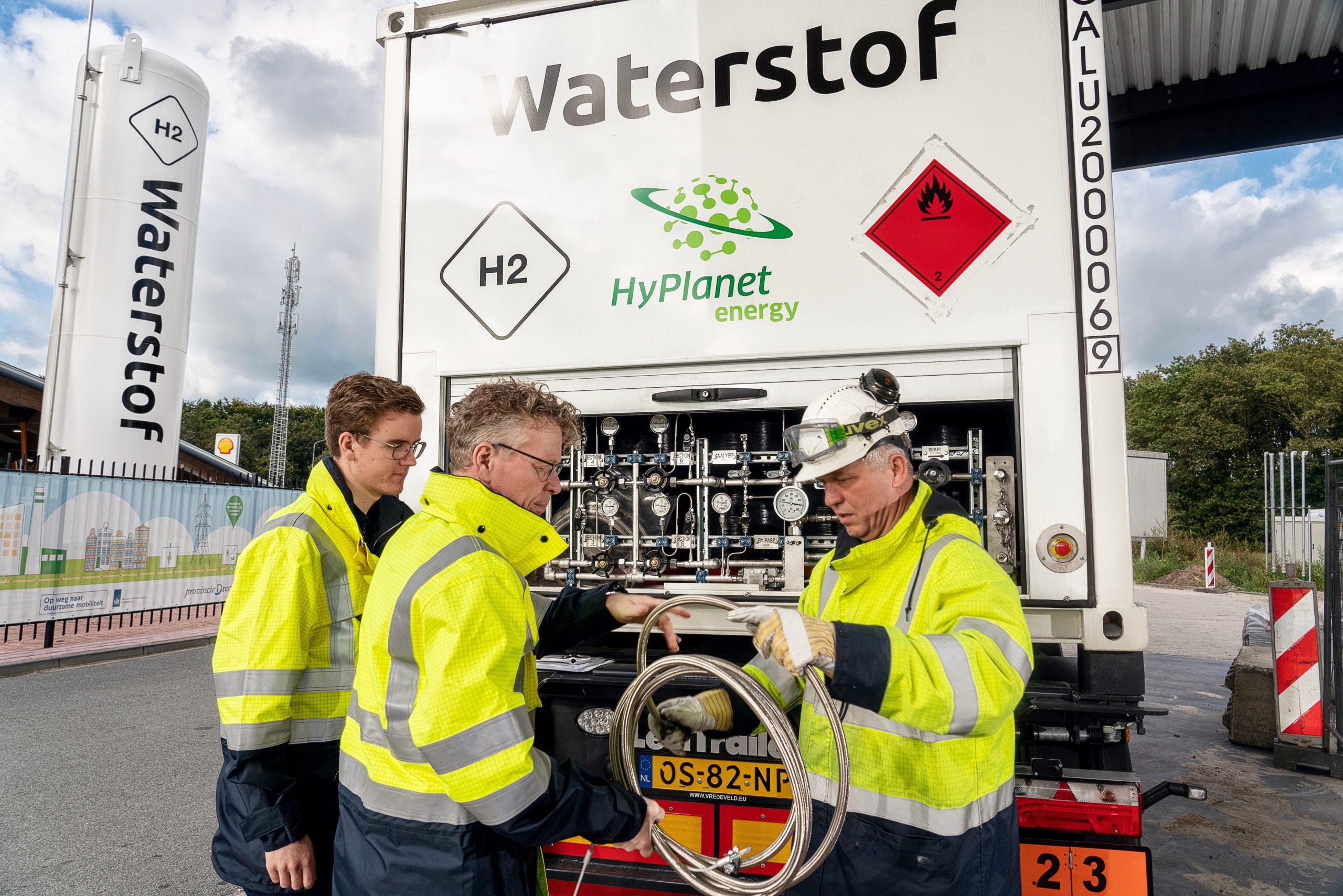 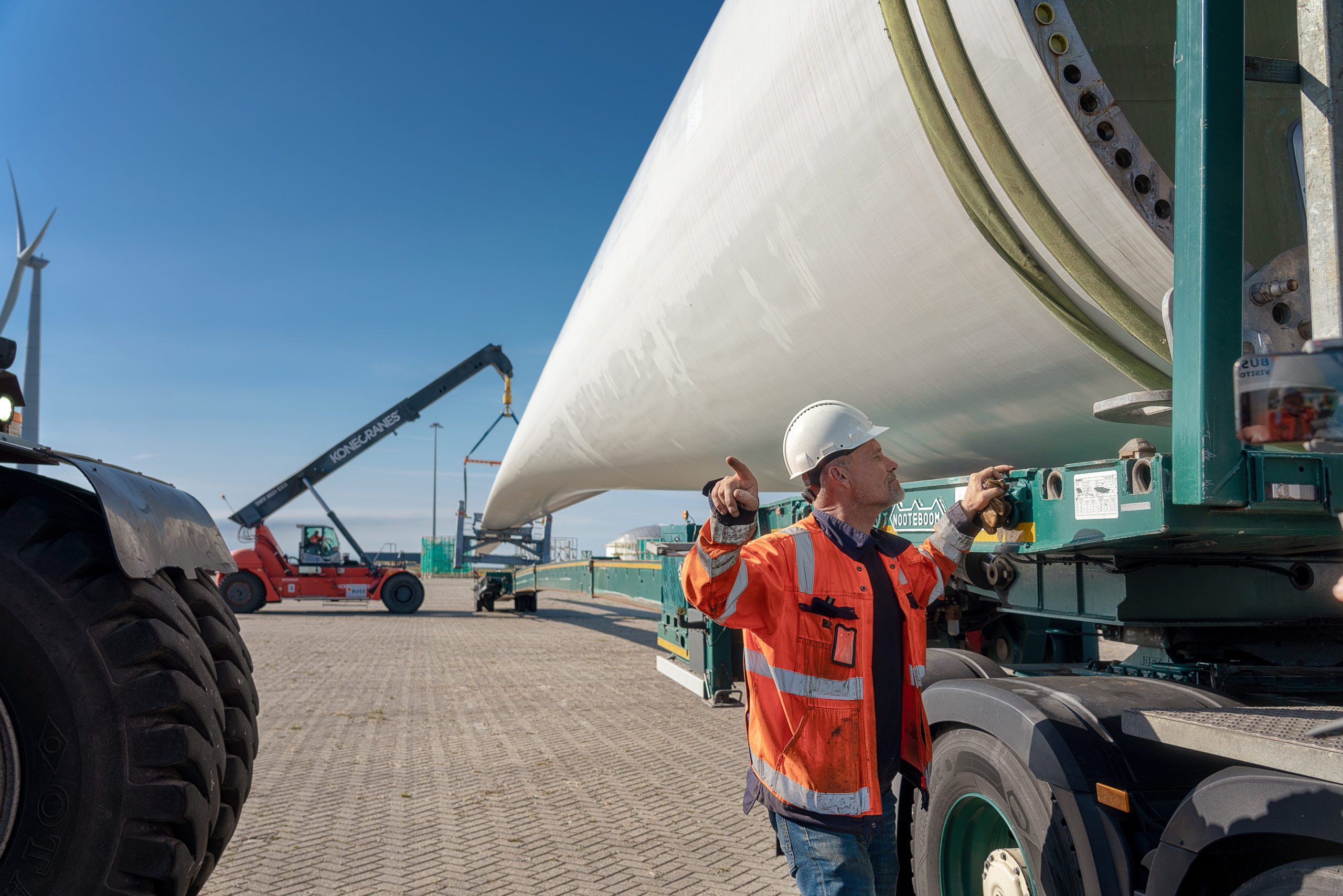 A quai operator lifts a wind turbine blade to prepare for installation at a windfarm at the Eemshaven. 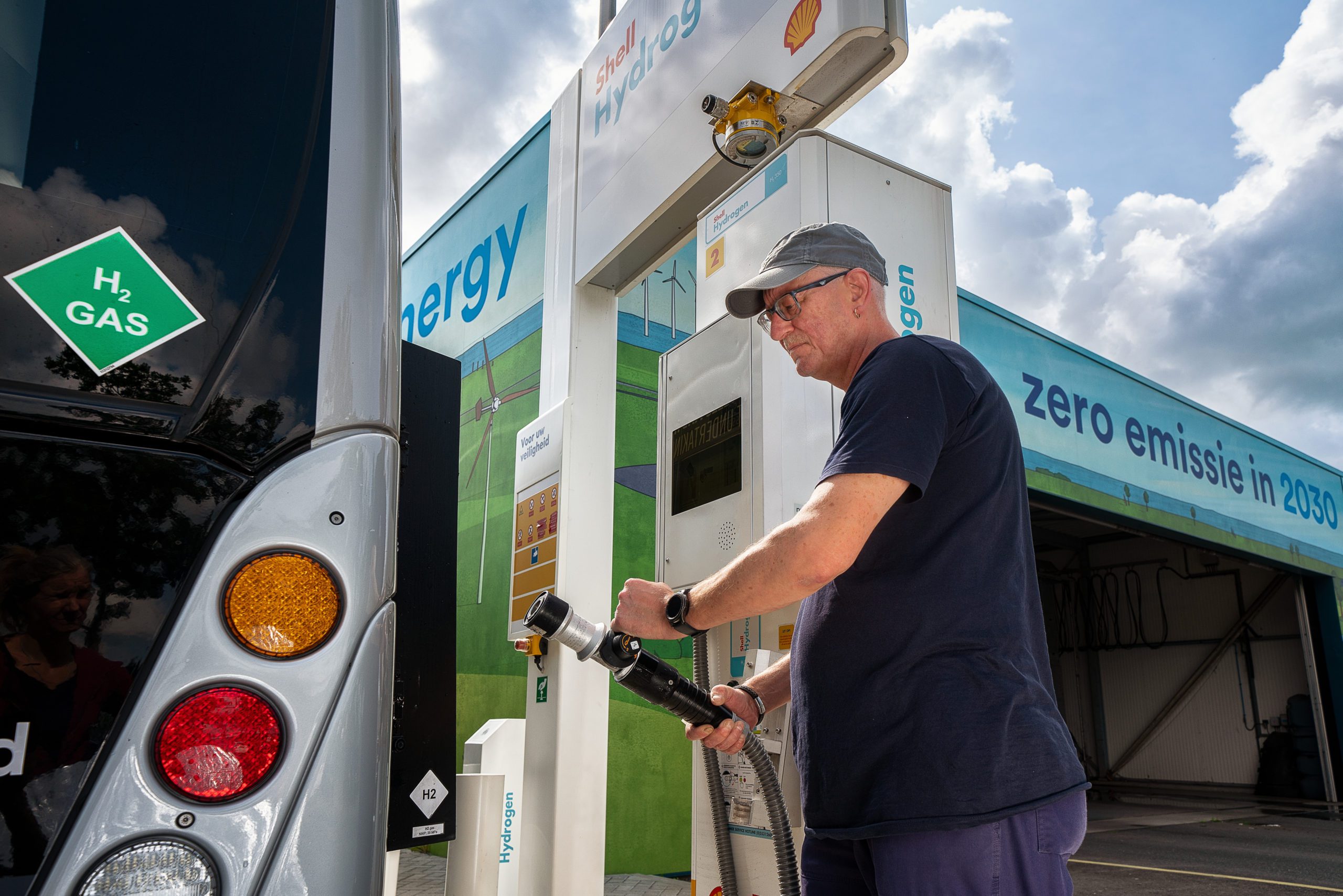 10 minutes to refuel a hydrogen bus at the depot in Groningen, a northern city in the Netherlands. The provinces Groningen and Drenthe currently operate one of the largest zero-emission bus fleets in Europe with 20 hydrogen buses now and a total of 30 buses by the end of 2021. 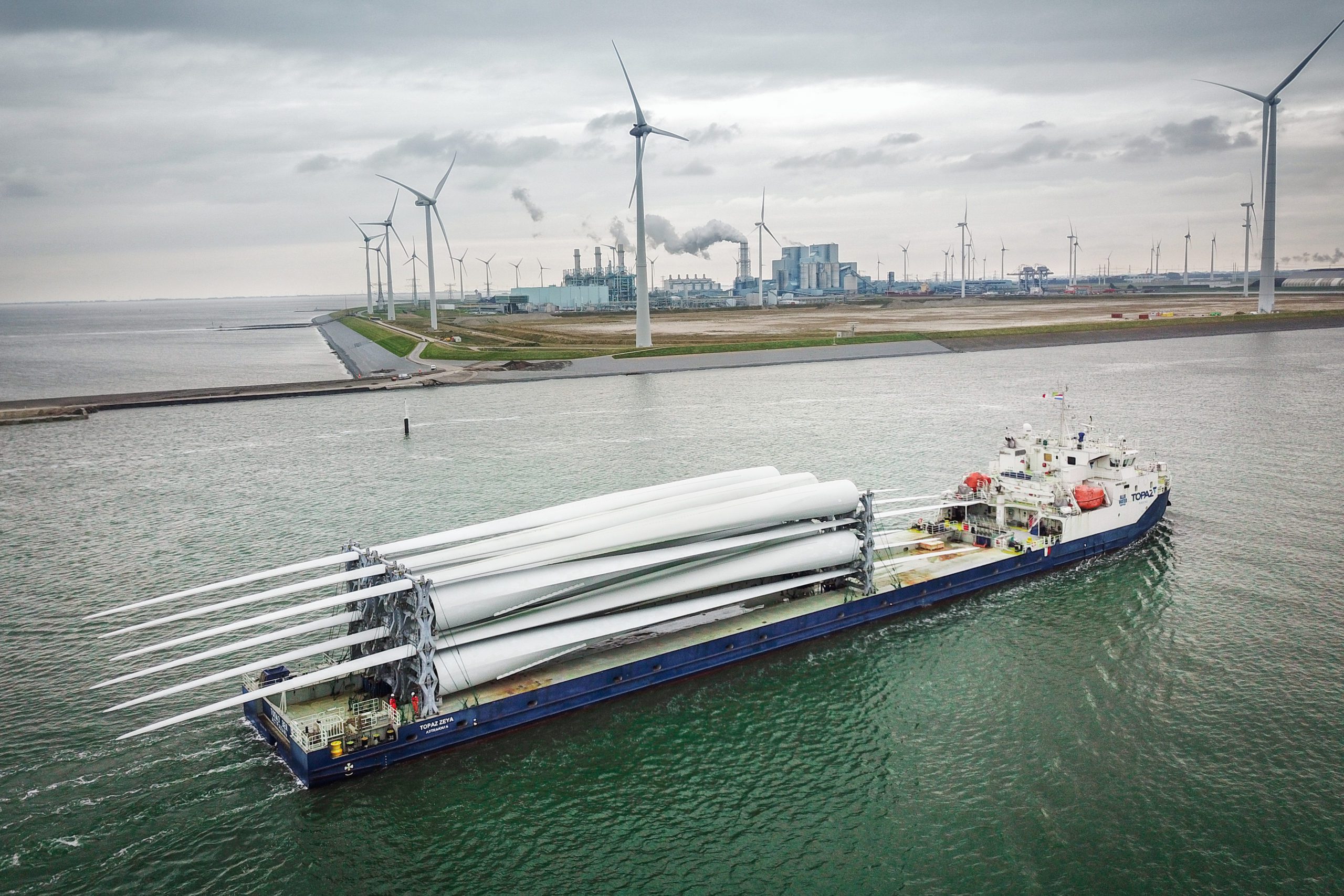 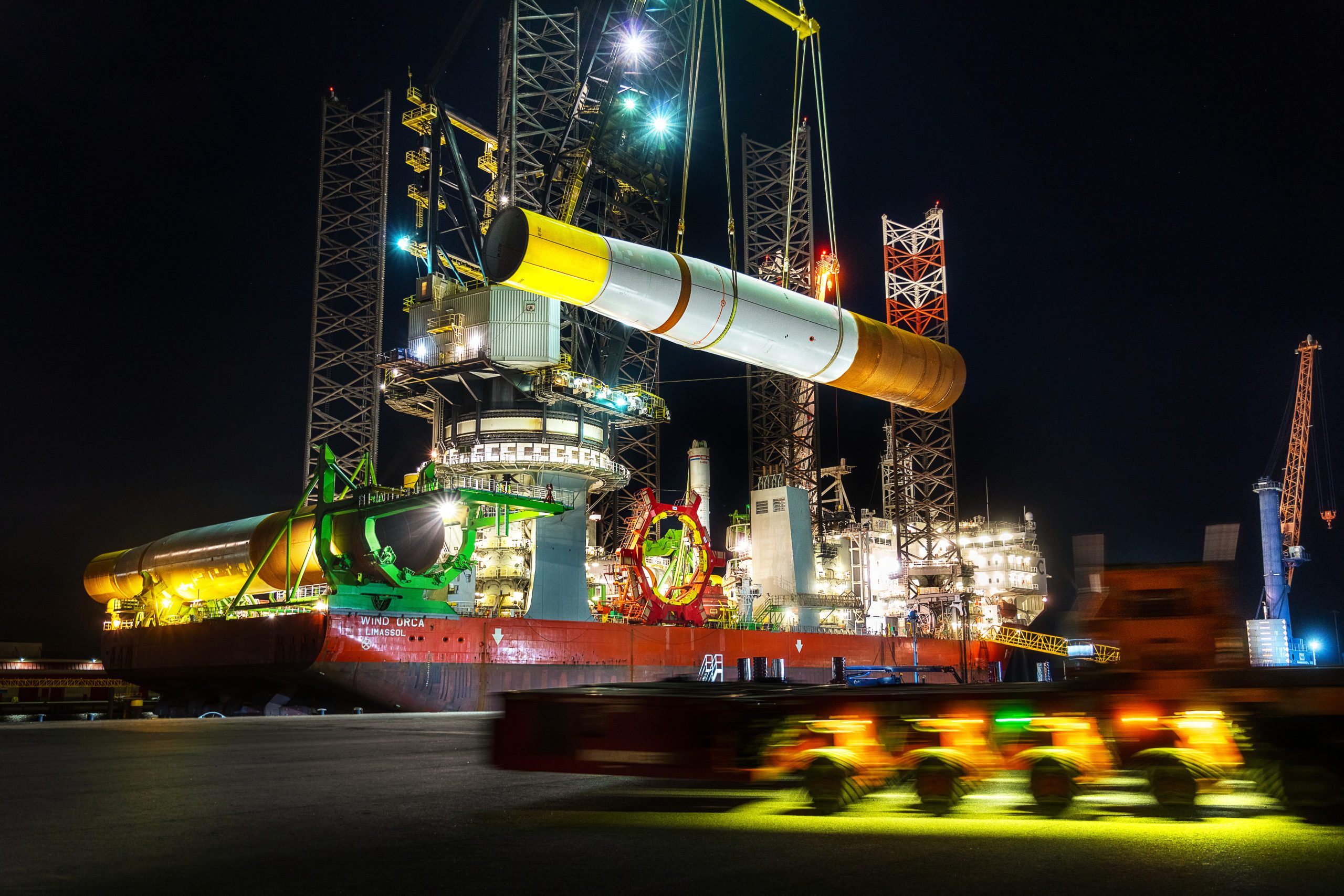 A supply ship in Eemshaven lifts the monopile of a wind turbine onboard, ready to be transported to offshore. 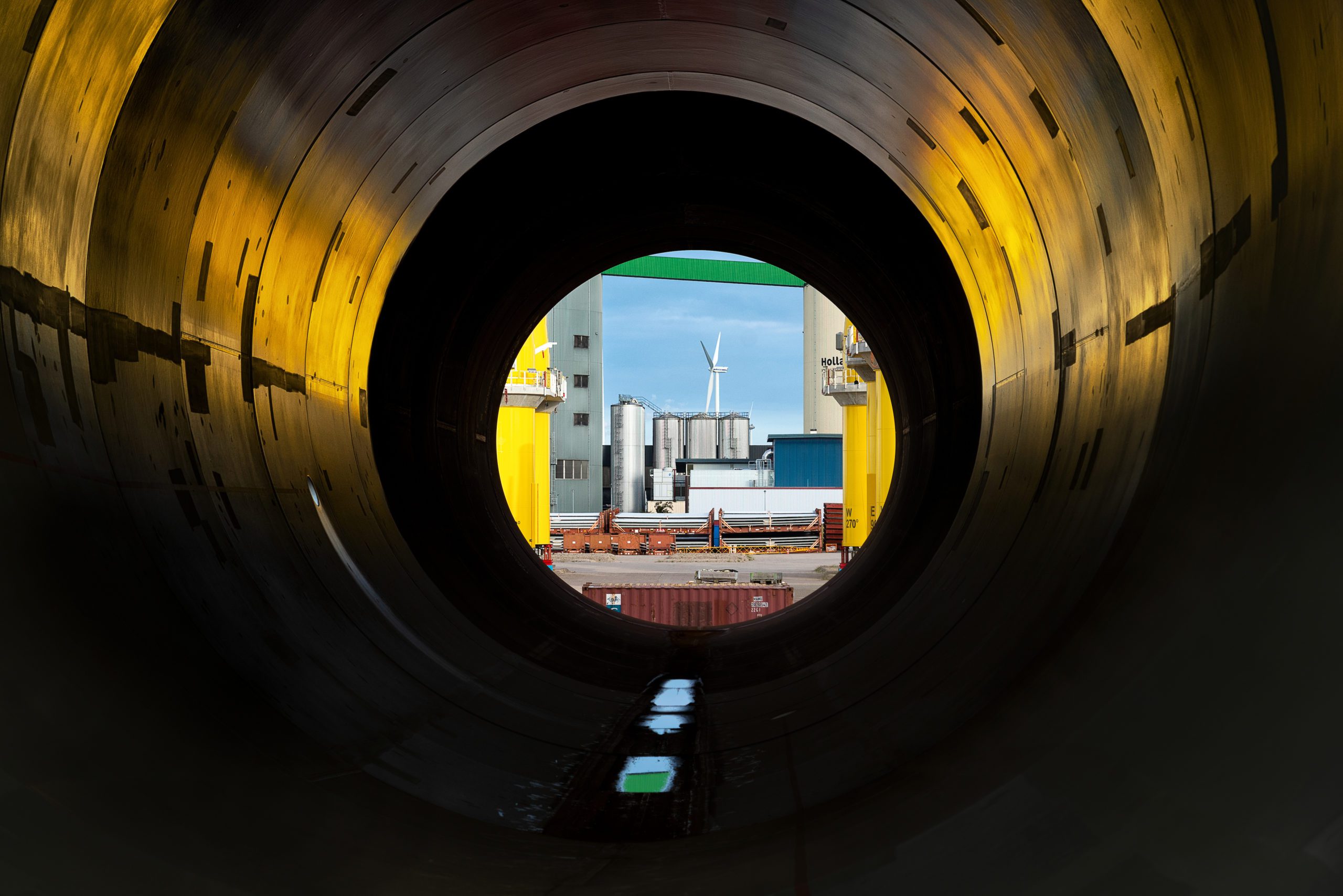 The Buss group opened the terminal in the Groningen Sea Port in 2012 to service growing demand for the offshore wind energy industry. Reachable by rail, road and sea, the terminal in Eemshaven soon became the launching point for the construction of offshore wind parks in the North Sea. Today, thanks to the growing demand of wind energy to produce green hydrogen energy, the Buss terminal’s business is booming, making it one of the world’s important players. 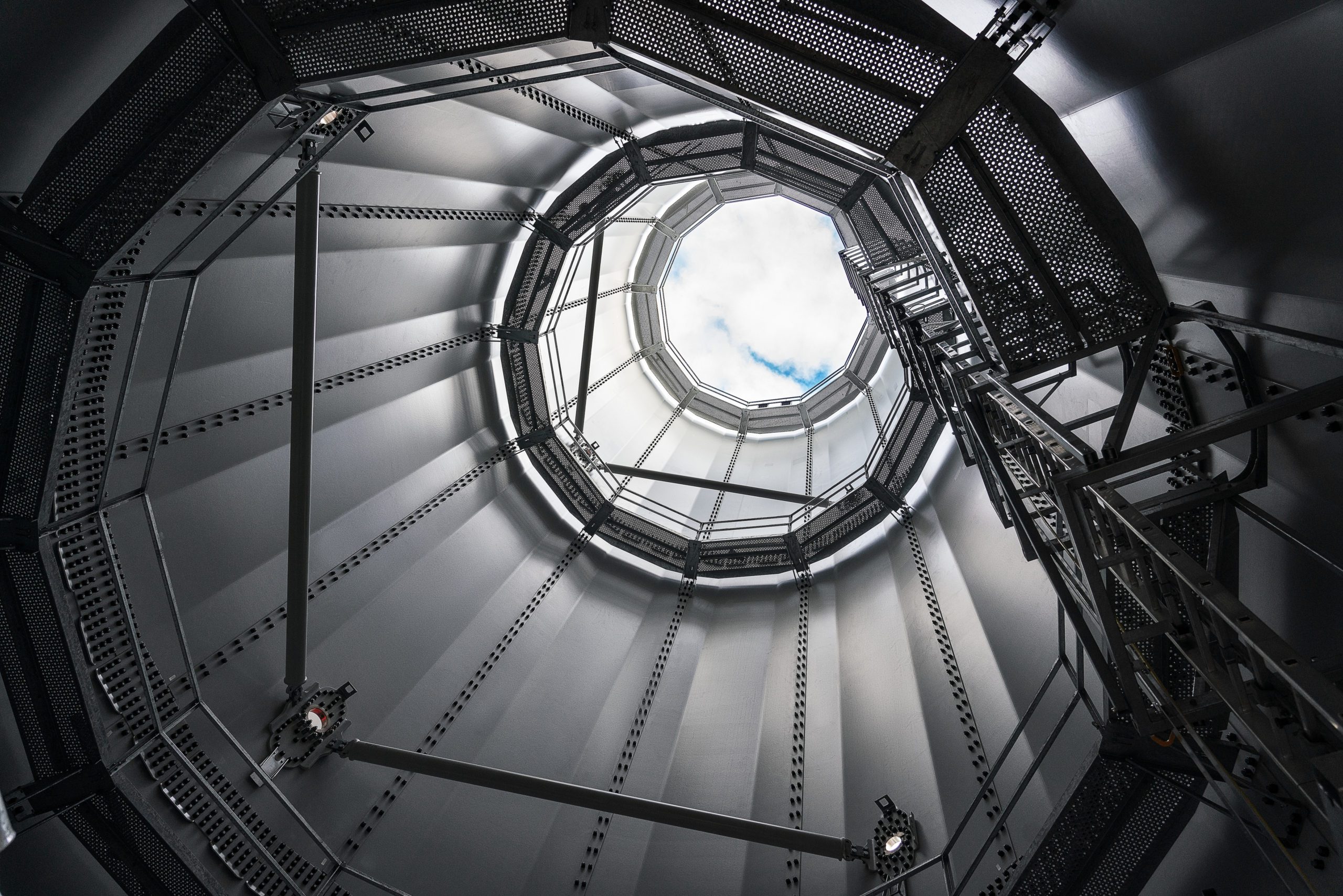 A Lagerwey climbing crane build a wind turbine in the Netherlands

Inside the tower of a wind turbine being built by a “climbing crane” in Groningen near the sea port in the northern Netherlands. Invented by the Dutch company Lagerwey, the “climbing crane” saves space and transport of large machinery parts. When it reaches the top, it lifts the turbine, adds the rotor blades, then climbs down. 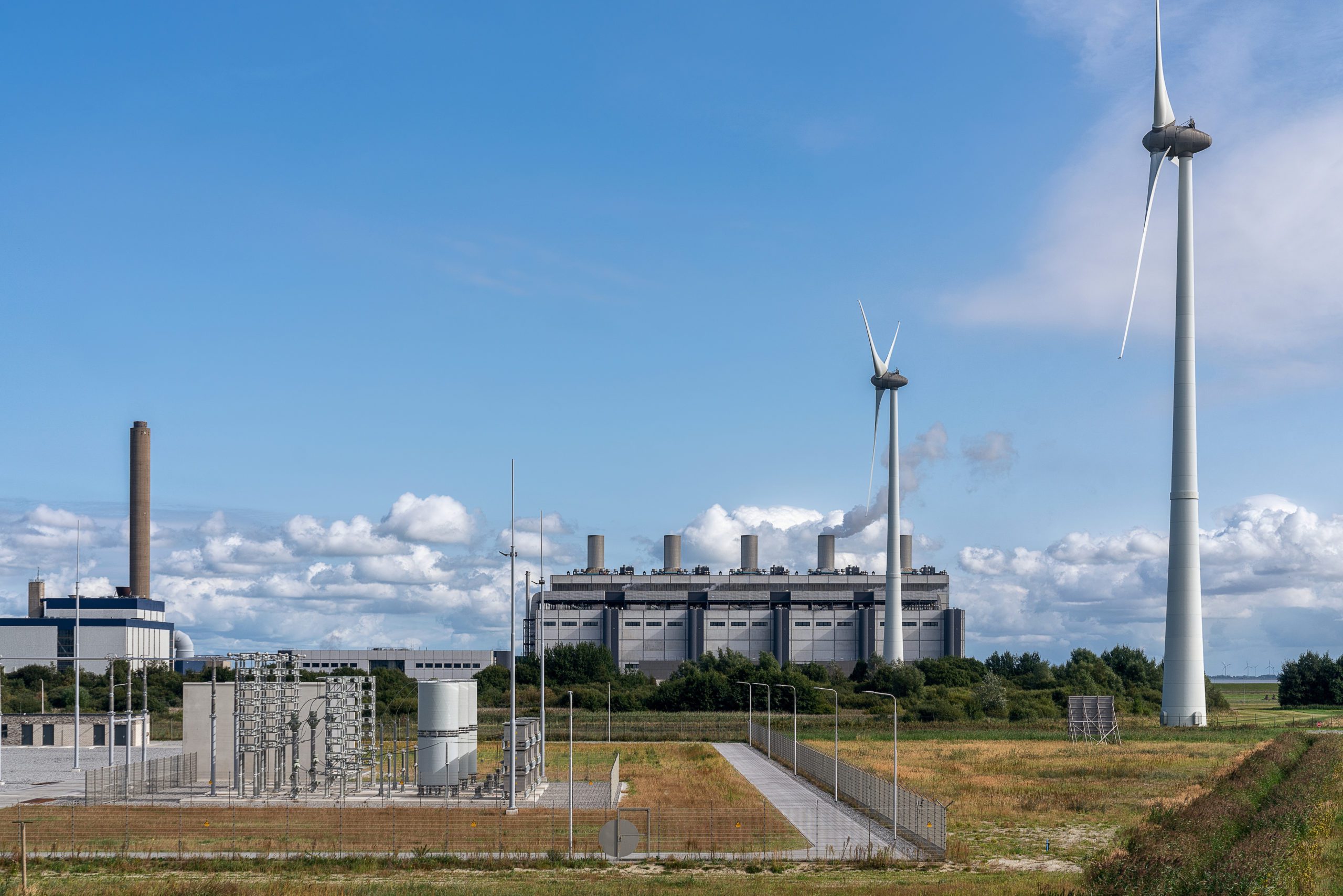 Engie gas powered plant in Eemshaven - the energy port of the Netherlands - producing around 30% of the country’s electricity. The power plant will produce hydrogen energy. In addition to the RWE coal-fired power station pictured here, two inter-connectors from Denmark and Norway are coming in and several offshore wind farms above the Wadden Islands will be connected. Here, offshore sustainable energy can be converted into green hydrogen on a large scale.