The European Hydrogen Strategy identifies three main phases of development for hydrogen: the kick-start phase, the ramp-up phase, and the market-growth phase.

The kick-start phase will largely occur from 2021 to 2025 with some countries being ahead of the curve and some catching up to the others. During these years, the foundations of the European hydrogen economy will be developed. At the end of the kick-start phase, 1 million ton of clean hydrogen will be produced per year and at least 6 GW of electrolyser capacity will be installed (according to the EU Hydrogen Strategy). Given the absence of a clear and harmonised EU framework for hydrogen and the initial lack of competitiveness in key applications, a fast-track approach to both removing regulatory hurdles and providing financial support measures will have to be adopted to achieve these goals with a focus on mature and scalable projects.

A fast-track approach to removing regulatory hurdles and providing financial support measures for hydrogen is primordial.

During the ramp-up phase from 2025 to 2035, there will have to be a solid supporting framework to develop a European hydrogen economy and achieve its commercial competitiveness. Hydrogen will shift from local to regional and national applications as large-scale storage, hydrogen ‘backbones’, and hydrogen valleys will be realised with support from the appropriate measures to stimulate supply and demand. Throughout this period and for many applications, hydrogen will also require regulatory support, including for example through tariffs, auctions/tenders, quotas, investment support, tax relief, and supported by Guarantees of Origin (GO). Most hydrogen production and applications will have achieved commercial competitiveness at the end of the ramp-up phase.

After hydrogen has achieved commercial competitiveness, the next phase, post 2035, will focus on market growth without any support frameworks. Hydrogen will continue to replace unabated fossil fuels by converting natural gas pipelines and further development of the European hydrogen system. The hydrogen market will be transparent, liquid, and governed by mechanisms of supply and demand. As network integration deepens, the market will require regulation to ensure interoperability and market rules to avoid monopolistic behaviour. 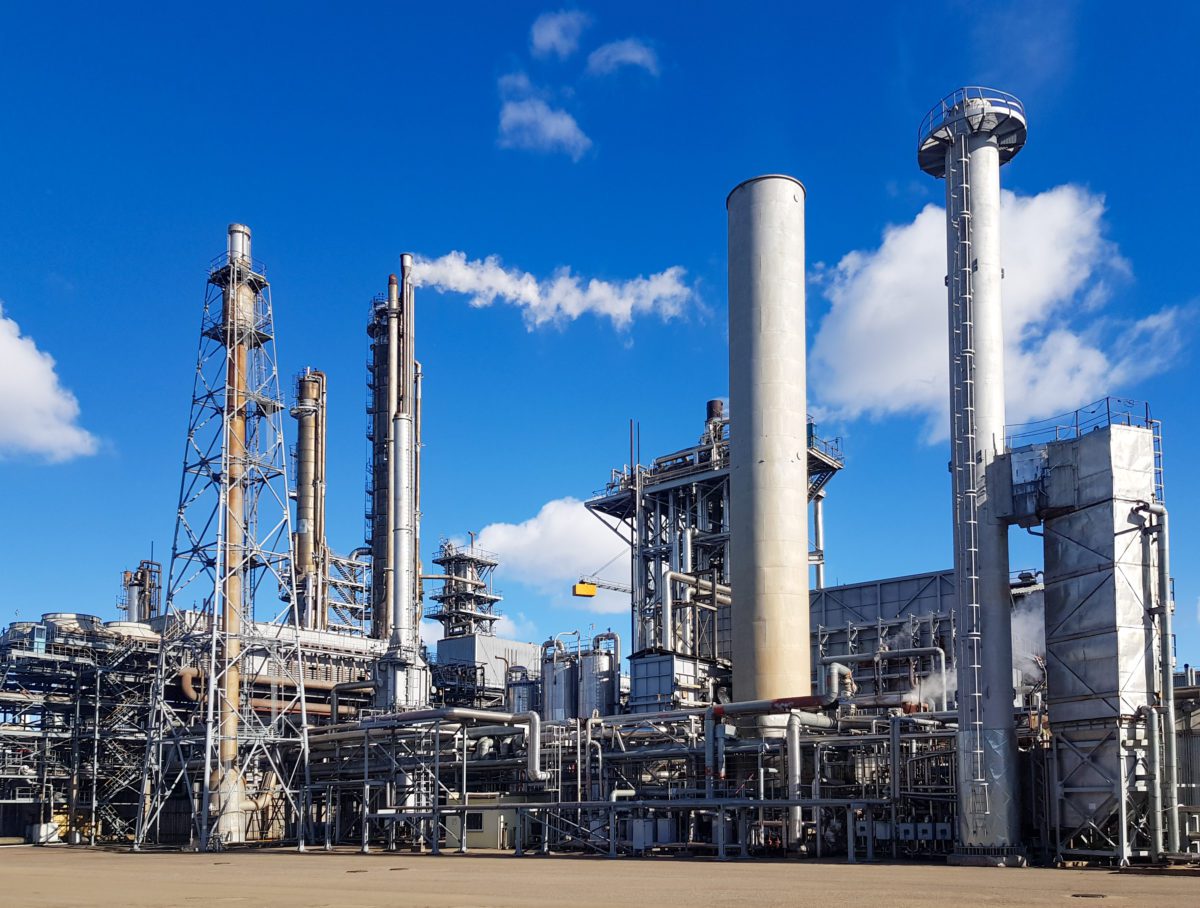 Although new emerging technologies, such as fuel-cell vehicles in the transportation sector, have highlighted the value of hydrogen to our societies, this most-abundant element in the universe known as hydrogen has been used for many years already as a source of energy in many industrial processes. In 2019, total demand for hydrogen was estimated at 8.4 Mt with the biggest share of demand coming from refineries and ammonia production. Together, these two sectors consumed almost 80% of total hydrogen consumption in EU, EFTA, and UK. About 13% is consumed by the chemical industry. Emerging hydrogen applications for clean hydrogen, like the transportation sector, comprised in 2019 only a minuscule portion of the market (<0.1%).

With constant pressure to reduce CO2 emissions in industry and ambitious targets being put in place, many hydrogen-consuming sectors are transitioning from fossil-based hydrogen to clean hydrogen, as the emissions involved in the production of the former add-up to their own direct carbon emissions. This is the case for refineries, which already typically use hydrogen for the reduction of sulphur content in diesel fuel. The transition into clean hydrogen represents a way of reducing the emissions in this sector. 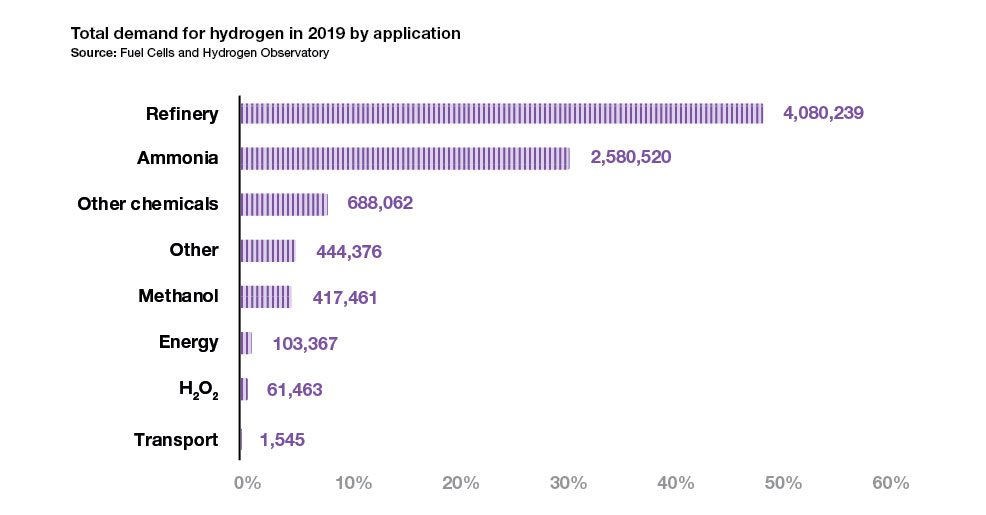 Similarly, the ammonia production process is a big hydrogen consumer that can benefit from the adoption of clean hydrogen. Although it is usually used as a feedstock for fertilizer production, ammonia has also been seen as a potential energy carrier and/or fuel, already considered a suitable e-fuel for maritime applications. The same reasoning can be applied to the production of methanol, used both in chemical processes and, as of recently, as an e-fuel.

E-fuels are synthetic hydrogen-based fuels that can be burned in combustion engines and help decarbonize hard-to-electrify vehicles (e.g., in the aviation and maritime sectors). Provided that carbon is captured from the atmosphere, renewable electricity is used during the synthesis and the hydrogen source is low-carbon, e-fuels such as e-methanol, e-ammonia, e-diesel, e-L(N)G and e-kerosene are great alternatives to reduce emissions in mobility. Carbon dioxide is still emitted during the combustion of e-fuels, but provided the conditions expressed above are met, the CO2 emissions should correspond to the amounts of carbon dioxide taken out of the atmosphere and used in the production process as a feedstock. 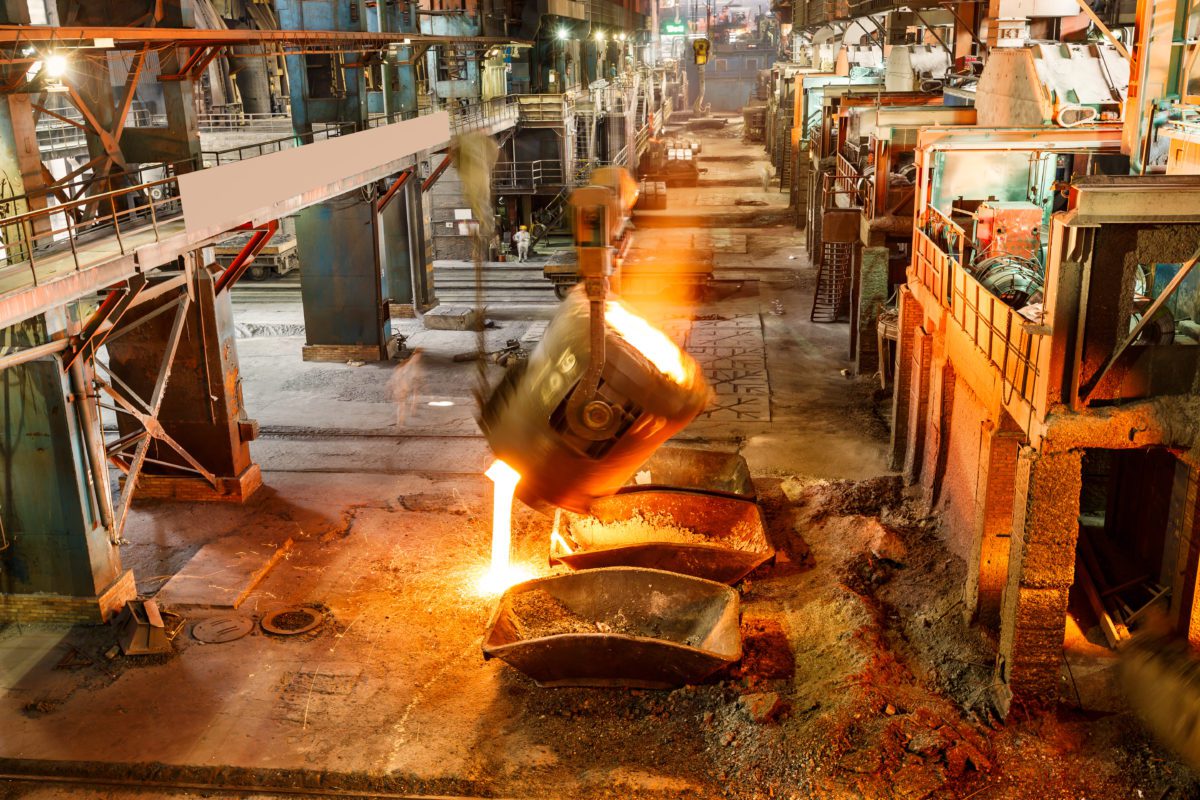 Clean hydrogen can also be used to help decarbonize the steel industry, a highly energy-intensive process that is responsible for 4% of the total GHG emissions in Europe. The steel production process can take different routes. In Europe, 60% of the production involves a blast furnace (BF) and a basic oxygen furnace (BOF), where coal is used as a reductant to transform iron ore into steel. The second route makes use of an electric furnace arc (EAF), powered by electricity, to produce steel from steel scrap and direct reduced iron (DRI) in different proportions. While the EAF route is already less carbon intensive than the BF/BOF method, emissions still occur when natural gas is used as a reductant to produce the DRI pellets. Replacing the natural gas by low-carbon hydrogen, combined with the supply of renewable electricity to power the EAF, will help decarbonize the entire steel production process. The steel industry is, in fact, the sector that is currently planning the biggest consumption of clean hydrogen by 2030, according to the Clean Hydrogen Monitor. 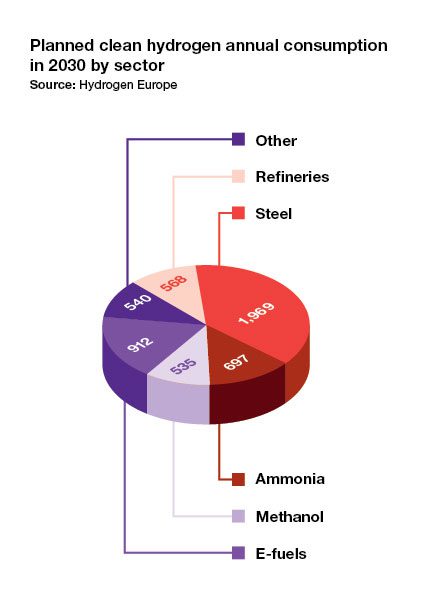 The total planned consumption of low-carbon hydrogen in the industrial projects tracked by Hydrogen Europe amounts to 5.2 Mt H2/year by 2030. In current industry ambitions, emerging technologies such as new ways to produce steel and the e-fuels industry will be the biggest consumers of clean hydrogen.

For reference, the EU Hydrogen Strategy has defined a renewable hydrogen production target for 2030 at 10 million tonnes. This is almost equivalent to total current hydrogen production capacity of 10.5 Mt that has been developed over several decades.

While power-to-hydrogen technology has been available and used for decades, it is only now expanding from installations measured in KW to installations measured in tens of MW. There is about 135 MW of operational electrolysis capacity in Europe right now according to the Clean Hydrogen Monitor 2021 compared to approximately 300 MW deployed globally as according to the International Energy Agency. 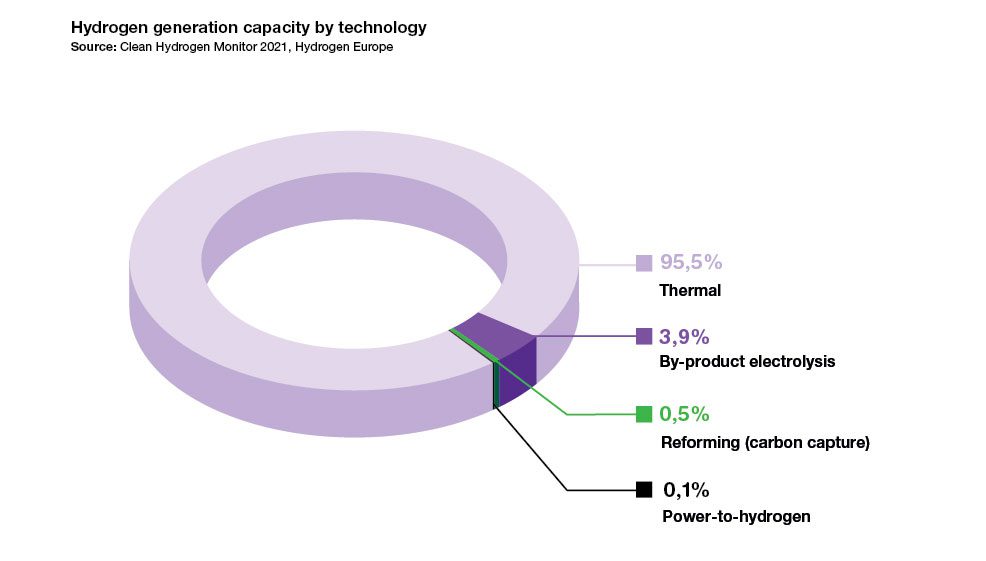 This capacity in Europe has grown significantly in the last few years from 90 MW in 2019 to 135 MW as of the time of writing in 2021. The average project size gradually increased from 0.9 MW in 2019 to 1.02 MW in 2021. Another sign of a gradual development of this market is the largest operating electrolyser. While in 2019, the largest operating electrolysers in Europe were around 7 MW, a 10 MW electrolyser was installed in 2021. There are multiple electrolysers of 20 MW and one of 30 MW under construction in 2021 that are scheduled to become operational in 2022. According to current industry ambitions, there are several projects in a 100 MW scale planning to be operational in Europe by 2023. 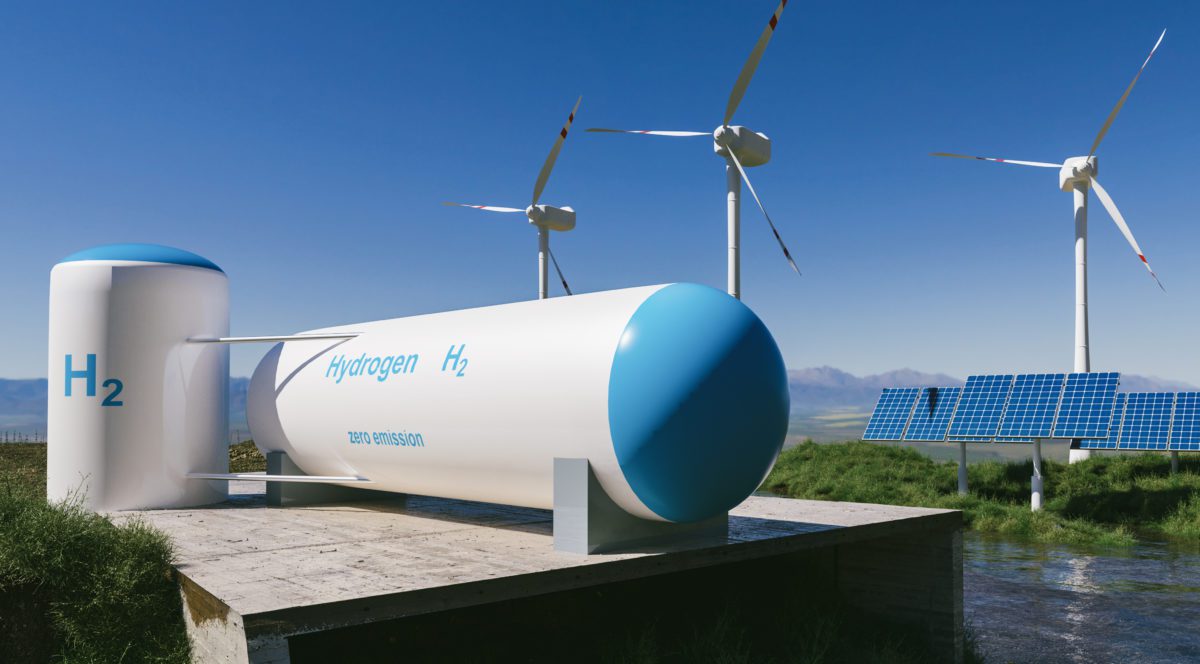 The largest operating and planned power-to-hydrogen projects are driven by project partners from the industry who serve as off-takers of the produced electrolytic hydrogen. In most cases, these off-takers are already using fossil fuel-based hydrogen and these projects serve as initial pilot phases for their more ambitious future decarbonization plans. One example is decarbonization of an ammonia plant or a refinery where the owner begins with a small electrolyser to pilot replacing their current fossil hydrogen supply with renewable hydrogen production before further committing and increasing the installed electrolyser capacity.

Clean hydrogen capacity in Europe has grown significantly from 90 MW in 2019 to 135 MW.

Some of the smaller, but common projects in late stages of development are focused on producing hydrogen for new mobility applications such as fuel cell electric passenger cars, buses, or smaller maritime vessels. These production sources are usually distributed and produced onsite at a refuelling depot/station. These are significantly smaller compared to the hydrogen production planned for industrial applications. 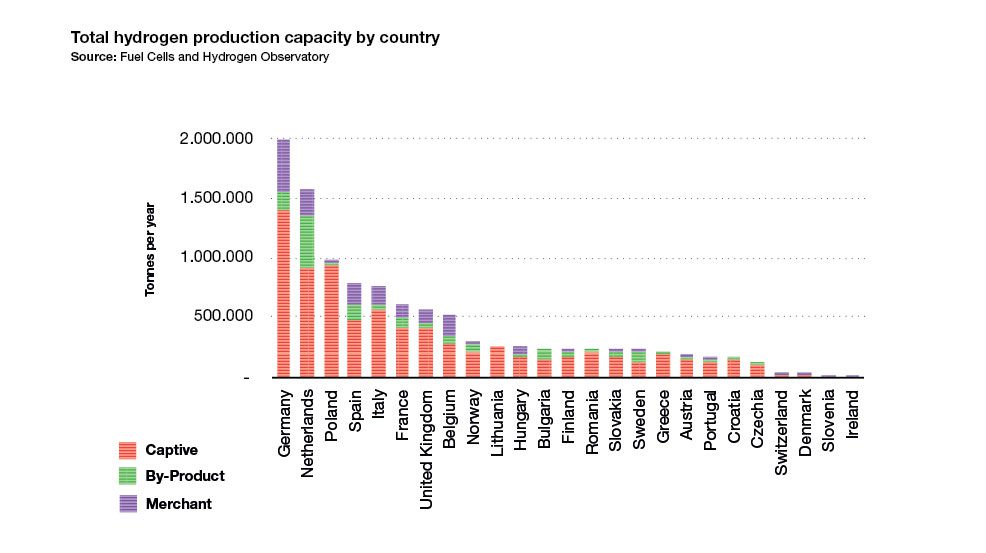 The EU Hydrogen Strategy’s projected goal is to reach 40 GW of water electrolysis capacity in Europe to produce renewable hydrogen by 2030. However, according to the Clean Hydrogen Monitor 2021, industry ambitions based on announced projects amount to 119 GW already. The graph below outlines the operational and planned projects as according to industry ambitions by 2030.

In addition to renewable hydrogen, companies are planning to continue producing fossil fuel-based hydrogen while adding carbon capture technologies to reduce or sequester carbon emissions. This is what the public calls blue hydrogen. According to the Clean Hydrogen Monitor, there are only three operating plants producing hydrogen with carbon capture. However, companies have announced plans for numerous large-scale plants around Europe planning to use this technology with the largest capacities being developed in the United Kingdom and the Netherlands.

Hydrogen will become a crucial energy vector and the other leg of the energy transition – alongside renewable electricity – to replace coal, oil, and gas across different segments of the economy. 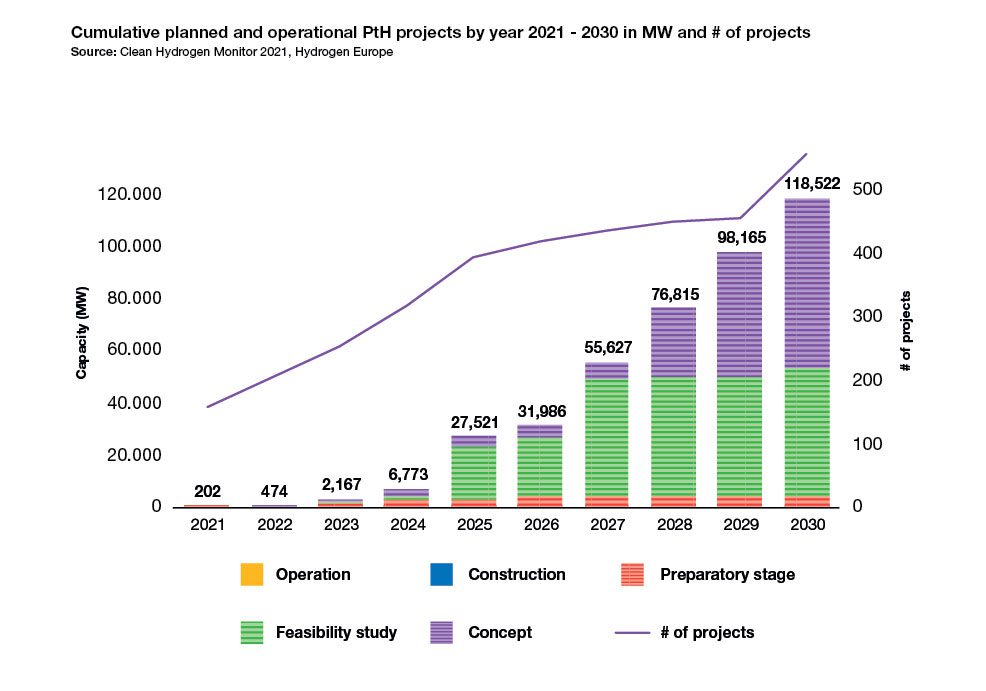 While the business case outcomes vary depending on the location, industry, and carbon price, the large scale emergence on the production side of the hydrogen market will continue to depend on either supply- or demand-side market stimulation that will help bridged the gap between fossil-based hydrogen and renewable hydrogen.