Stationary solid oxide fuel cell systems (SOFC) are a key component in the energy mix of the future. The small, decentralized power stations generate electricity and heat from natural gas, hydrogen, or a blend of both. A promising market, in which Bosch places great hopes. The two people in charge of the project, Dr. Wilfried Kölscheid (WK), Senior Vice President Engineering & Manufacturing, and Marcus Spickermann (MS), Senior Vice President Sales & Market development, talk about fuel cell systems for power generation and their advantages.

Fuel cell systems play an essential rolein the energy mix of the future.

When you think about the stationary fuel cell systems, do you get fired up?

WK: The subject electrifies us all, because we are able to offer an efficient, cleaner, decentralized energy supply. We consider stationary fuel cells to be an essential component of the energy transition, and a promising market to boot. Bosch believes that the whole market for decentralized energy production using stationary fuel cells will reach a volume of around 20 billion euros by 2030.

What is your optimism based on?

MS: With the stationary fuel cell system, we can generate electricity and heat with very high levels of efficiency from natural gas and, in the future, from 100% hydrogen. But that is not all – the production of electricity is extremely climate-friendly. 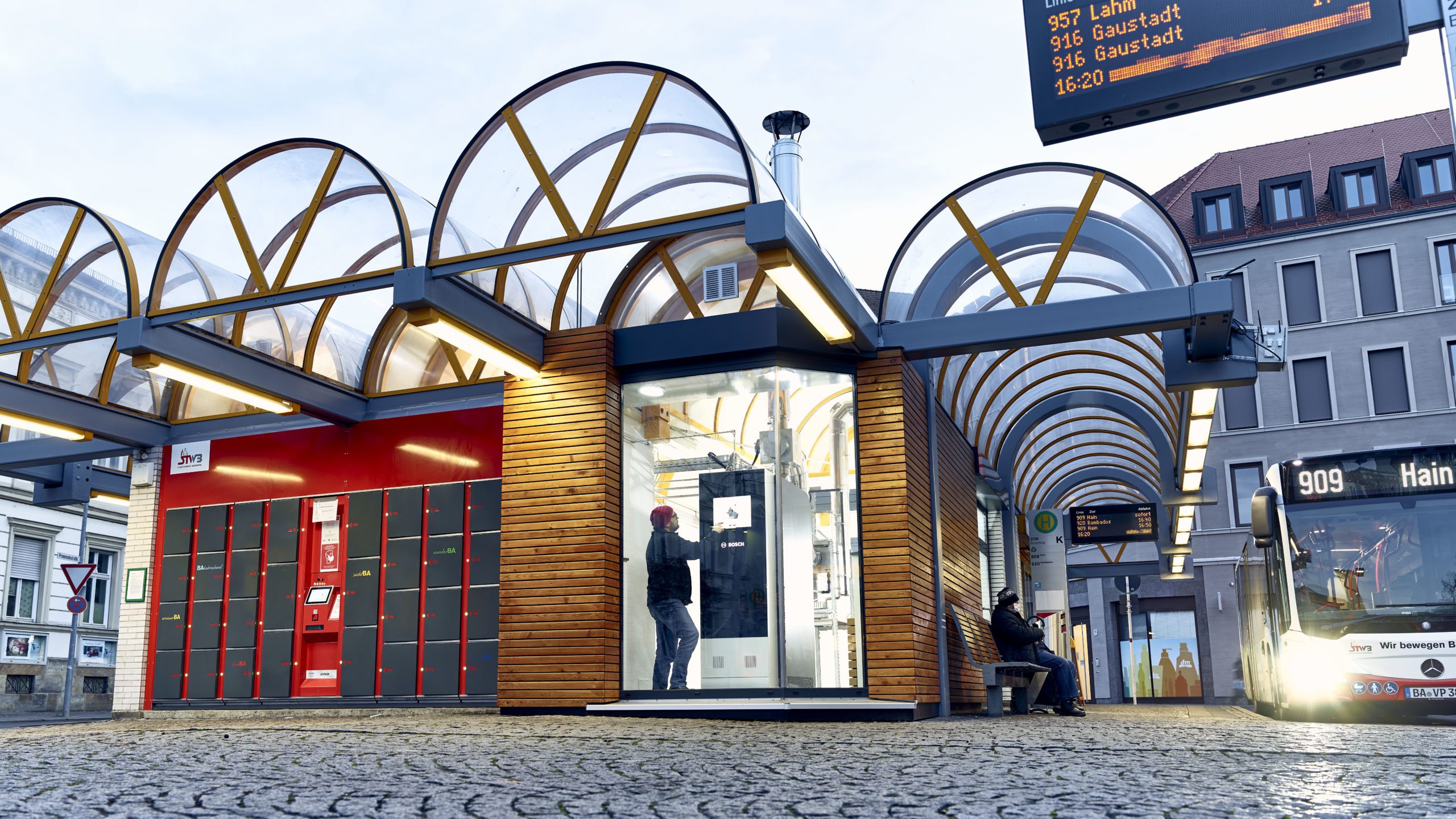 Central bus station in Bamberg: A system there generates around 10 kW of electricity - enough to meet the annual requirements of more than 20 four-person households in an urban quarter. Source: Robert Bosch GmbH.

What does that mean specifically?

MS: By level of efficiency, we mean an electrical efficiency of more than 60%. If we are also using the waste heat, then the levels of efficiency can be 85% or more. This makes the solid oxide fuel cells far superior than other energy converters. A coal-fired power station, for example, has an efficiency level of 40%.

And what about the emissions?

WK: The operation of fuel cells is nearly emission-free; it produces hardly any nitrogen oxides or particulates. When run purely on hydrogen, the emission level falls almost to zero. In addition, fuel cells fed with natural gas provide a significant CO2 emission benefit compared to electricity from coal power plants and they pave the way to zero carbon emission when green hydrogen is used.

What roles do stationary fuel cell systems play in the energy mix of the future?

WK: Without doubt, they play a relevant role, for example in markets such as Germany, where a huge natural gas network is in place. In the future, this can be converted towards green hydrogen transport. With the networked SOFC, electricity and heat can be generated efficiently in exactly the places where they are needed. In doing so, we are safely and sensibly adding to the power grid that is already limited or overstretched in some cities.

Do you already have some stationary SOFC units installed?

MS: Yes, several. For example, we have put a stationary fuel cell into operation at the main bus station in Bamberg. The system is two meters high and generates some ten kilowatts of electricity, which is enough to power more than 20 four-person households in the part of the city surrounding the bus station. We want to use it to show how a decentralized, climate-friendly energy supply of the future can look.

What other areas of application are there?

MS: A wide range. Our appliances can be used in the urban context to supply buildings, provide electricity to data centers, and to supply energy in industrial and commercial segments.

What is Bosch’s position in the market for stationary fuel cell systems?

MS: With our devices, we occupy the 10-kilowatt performance class of the energy market. That is a new segment that we plan to help set up. But we can also see that many manufacturers of fuel cell systems, even those in higher performance classes, are trying to access the new market. Our aim is to become a leading provider in this segment.